When in doubt, throw it hard 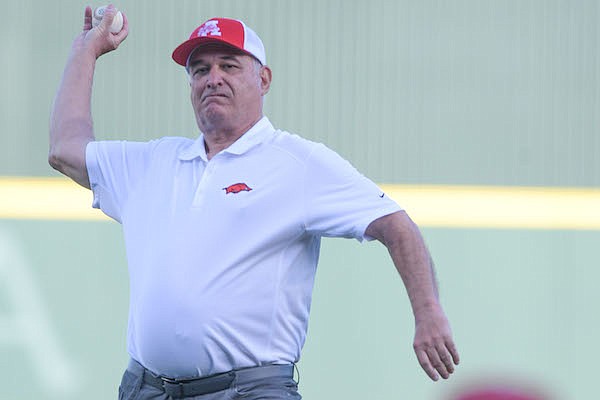 Retired Hawgs Illustrated publisher Clay Henry throws a ceremonial first pitch prior to a game between Arkansas and Ole Miss on Saturday, April 30, 2022, in Fayetteville.

It sounded like fun when Kevin Trainor phoned with an offer in early April to throw out the first pitch to celebrate my retirement as Hawgs Illustrated publisher.

I picked a date, the Saturday night of the Ole Miss series. Then, the nerves began to hit. I had one thing to calm my stomach: it rains a lot in late April.

But when the last Saturday of April arrived, so did a perfect night. It was 77 degrees and not a cloud in the sky as a season-best announced attendance of 11,736 piled into Baum-Walker Stadium ahead of my 15 seconds of fame.

Leading up to it, there was great fun for everyone, except for me. There were all sorts of things that could go wrong. My ladies — wife Jean Ann and daughters Sarah and Becca — plotted what they would wear and had suggestions for me. And, everyone reminded of the things to avoid.

I could fall down. Old people do that, especially when they try something athletic like throwing a baseball.

There was more. My family noted early in the afternoon not to eat anything because I’ve been known to leave a stain in the middle of my white shirt. Old People do that, too.

They picked out a white Razorback logo shirt. As a media member, I’d never worn anything with a Hog on it. But this was different. I was done being a media member.

Then there was the competition. There was to be an 8-year-old throwing out a pitch just ahead of me. He was going to the halfway point between the mound and home plate. I didn’t realize that added rules to where I had to throw from.

Leaning against the dugout railing, an assistant coach said, “Clay, you can’t go where he’s going. Go all the way to the edge of the mound and don’t bounce it.”

Never mind where the first first pitch went. The second first pitch, mine, couldn’t have gone to a better spot.

Catcher Max Soliz reached out just above the plate for my sinking fastball. I don’t think it made a loud pop. But it made me happy. I’d done it, thrown a strike.

Radio man Bubba Carpenter, a former major leaguer, had teased that he’d turn on the TrackMan data center in the booth to get velocity and spin readouts. He did, but nothing came up. There must be a minimum threshold. His estimation: 22 mph velocity, 721 spin rate.

It was a sinker, too. Gravity can do a lot to pull down a pitch at 22 mph.

Know this, at almost 68, that’s all I had in the tank. I relied on form and turned it loose with all my might.

Scott Tabor and I had talked about form earlier in the week as we hit golf balls at the practice range at Big Creek Country Club in Mountain Home. He remembered that there was an old baseball in his truck that he tossed for his lab.

We went to the parking lot, but I thought it was not going to happen when he said he didn’t have any ball gloves. Never mind, he said, “I don’t need a glove to catch what you are going to throw.” And, he did not.

I threw Scott five pitches. He said, “Just concentrate on three things: Turn your shoulders back, forward and follow through.” And, he added, “Cut it loose.”

That’s all I was trying to do and it went great. Soliz caught it, met me halfway and handed me the ball. He said, “It was a strike, low in the zone. You did great.” I smiled and put my hand on his shoulder and said, “Now go kick some Ole Miss (butt).”

At that point I doffed my cap and walked back to Trainor. I became aware for the first time that Jon Williams, the public address announcer, was saying nice things about me. So I pointed his way in acknowledgement.

That’s also the first time I realized people were shouting my name from the stands. I got chills. And I looked up to the HI sky box right above the UA dugout and saw my wife and two daughters cheering. It’s hard to describe that without getting teary eyes.

Then there was a sweet walk up the steps through the stands. Hands came out and I slapped them. It was a pretty cool walk.

That’s when it dawned on me that I had written a long piece thanking folks two weeks ago. Those were all the co-workers at Hawgs Illustrated. What about fans?

I don’t know how many of those 11,736 are Hawgs Illustrated subscribers, but probably a bunch. If they haven’t read me there, then many have seen it at WholeHogSports.com. They know me better than I know them.

It’s not that I have not known they existed. I recall from an early time in the history of the magazine about all of the nice messages forwarded by Stephanie Meehan, our circulation manager when I first became publisher. She answered the calls at the 800 number. Many did not have problems. They wanted her to give me good messages about the content in the magazine.

Stephanie managed our database and did a wonderful job talking to subscribers. She was my conduit to Razorback Nation. She probably had talked to some of those shouting my name from the stands.

One of the last things that hit me — maybe on the way home Saturday night — was all of the help I’ve gotten from 30 years (and even before that as a young reporter) from coaches, players and support staff while covering the Razorbacks.

Trainor and I have worked together all the way back when he was a student assistant in the communications office. He’s been awesome, just as those who have followed him in that department. Kyle Parkinson, the current ace in communications, has become a good friend. We share family details, the ups and downs.

I have always gotten A-plus treatment. I’ve thanked them before, but probably not enough. I love taking a stack of magazines into their offices 20 times a year.

Then, there are Norm DeBriyn and Dave Van Horn. I know full well that there is no place in college baseball where a sportswriter could be put in a better spot to throw out a first pitch. There is no other place like Baum-Walker Stadium. They built that.

There are no other fans like in Razorback Nation. They are the reason I've had a job the last 30 years.

My relationship with both of those legendary coaches is wonderful. They have always stopped their work to help me work. They are the best as both human beings and coaches.

I followed Trainor in front of the UA dugout just before my pitch. The team was emptying into the outfield for a final word from their coaches. Out popped Van Horn behind his players. He leaned my way and stuck out a fist as he trotted behind his men. I gave him the bump back as we passed.

That’s when I decided what I was going to do on the mound. I had thought maybe I’d just throw it softly and give it plenty of loft in hopes it would make it to the catcher. Nope, I’m going to throw it with everything I’ve got. That’s what DeBriyn and Van Horn always get from their men. When in doubt, throw it hard.

Then, a funny thing happened, everything got quiet, everything felt right and I wasn’t nervous.

No one has ever had more fun. 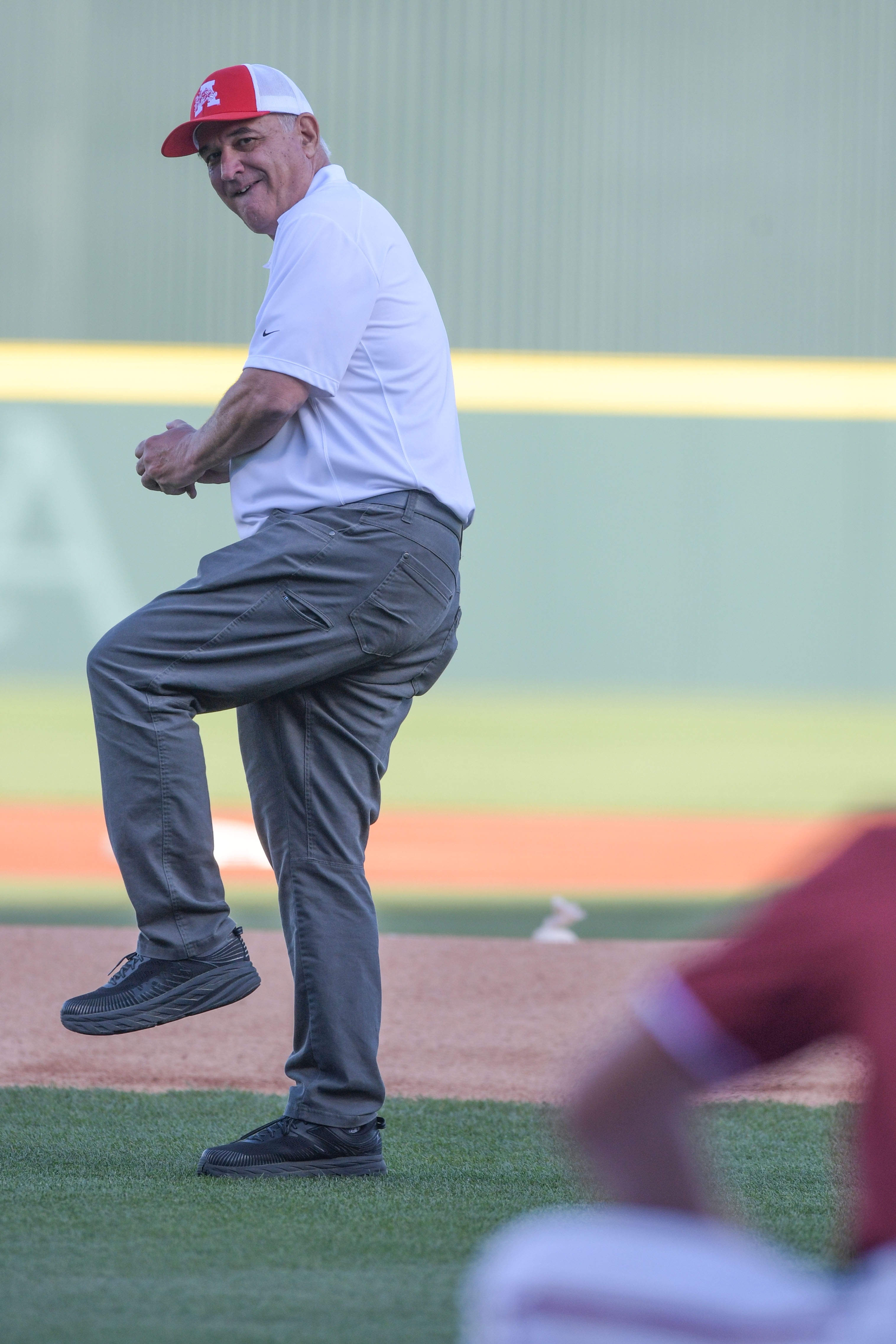 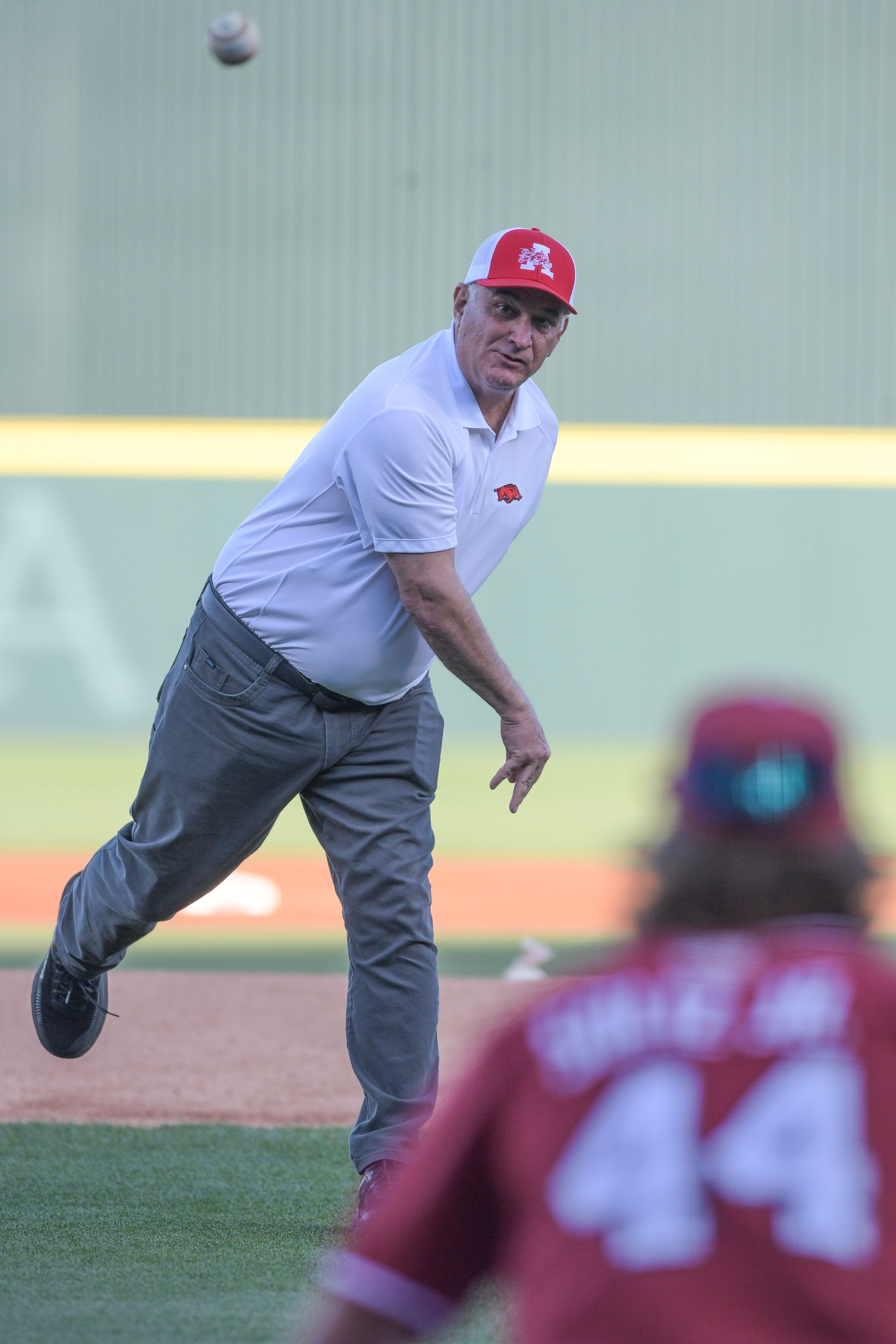