Auburn pitching could be shorthanded for Arkansas series 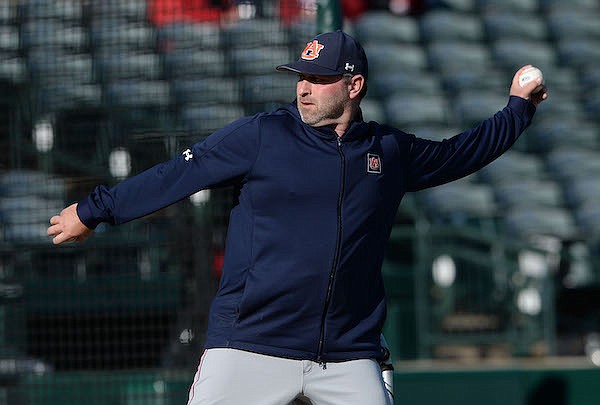 Auburn coach Butch Thompson throws batting practice prior to a game against Arkansas on Thursday, April 1, 2021, in Fayetteville.

No. 18 Auburn is dealing with injuries to key pitchers ahead of its series against third-ranked Arkansas this week.

“Both guys have a chance to pitch way beyond the SEC,” Thompson said on the “This Week in Auburn Baseball” podcast. “These injuries will take a minute to decipher and uncover, just like with any injury, to make sure you’re doing the right thing and get a feel for where you’re at.”

Mullins (2-1, 3.63 ERA) left during the second inning of his start at top-ranked Tennessee last Friday. Burkhalter was pulled after he gave up two runs on two hits without recording an out during the seventh inning of the same game.

Mullins has started all seven of the Tigers’ SEC openers this season and Auburn has a 5-2 record in those games. In conference-only games, Mullins has a 3.29 ERA in 27 1/3 innings and is holding batters to a .196 average.

Burkhalter has eight saves in the Tigers’ 12 SEC victories.

“I would say Burkhalter would be 50-50,” Thompson said, “a definite return to action unless we try to return too soon and create another tweak. It’s very, very positive with Blake Burkhalter and it’s very important that Blake, the coaching staff do a good job of not pushing it before it’s ready, to not create any more setbacks from a hamstring standpoint.

Thompson indicated Auburn is not likely to change the rest schedules for its other two starting pitchers, right handers Trace Bright (2-4, 4.29) and Joseph Gonzalez (6-1, 2.30), who start on Saturday and Sunday, respectively.

Thompson said he might list the Friday starter as TBA for the Arkansas series until he decides between right hander Mason Barnett (2-1, 4.19) and left hander Tommy Sheehan (1-0, 6.43).

“We’ve had a four-man rotation all year and Mason Barnett has been that fourth pitcher,” Thompson said. “He can definitely move into that area.

“He threw a ton in our league last year…and has had some good starts for us in the midweek. We feel like we have some pieces, but we have a chance right now to not look at this negatively.”

“They continue to play great defense,” Thompson said of the Razorbacks. “They get great starting pitching.

“We saw the No. 1 pitching staff last week (at Tennessee). We’re going to see the No. 2 pitching staff in the SEC this week. Our work is cut out for us. Hopefully by sharpening our axe with Tennessee, we’re even more prepared for these at-bats.”