Arkansas draws No. 3 seed in Ohio 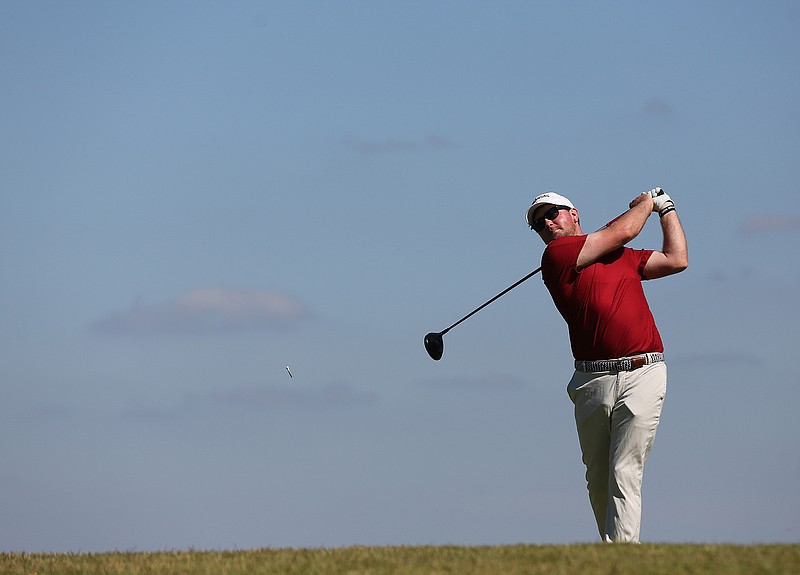 Arkansas' Luke Long tees off on the eighth hole during the final day of the Jackson T. Stephens Cup on Wednesday, Oct. 20, 2021, at The Alotian Club in Roland..(Arkansas Democrat-Gazette/Thomas Metthe)

FAYETTEVILLE — The University of Arkansas’ draw for the NCAA men’s golf championship is a daunting one that will take the Razorbacks to Big Ten country to face a rugged field, including a perennial powerhouse and the dangerous home team.

The No. 14 Razorbacks were selected as the No. 3 seed on Wednesday for the NCAA Columbus (Ohio) Regional, to be played May 16-18 at the Ohio State Golf Club.

Arkansas, playing in its 13th consecutive regional under Coach Brad McMakin, will face a loaded field at the Scarlet Course, led by top seed and No. 2 ranked Oklahoma State. The 11-time NCAA champion Cowboys and Razorbacks will be joined among the top six seeds by No. 11 Georgia Tech, No. 23 Clemson, East Tennessee State and the host Buckeyes. The rest of the teams in the field are Duke, Northwestern, Florida Gulf Coast, San Francisco, Kentucky, Wright State and Southern Illinois.

The top five seeds from each of six NCAA regionals will advance to the championships, scheduled for May 27-June 1 at Grayhawk Golf Club in Scottsdale, Ariz.

Golf Chanel analyst Ryan Lavner described the field in Columbus as the toughest of the regionals.

“I think they’re all tough,” McMakin said. “On paper it might look the toughest. I’m very happy with where we’re going. It’s a great golf course. Really difficult.”

McMakin compared the Scarlet Course to The Blessings, the Hogs’ home course in Johnson and called it a “traditional” course.

“It’s going to be old school with a lot of high rough that we don’t see on a lot of the northern courses,” he said.

McMakin said the Razorbacks will use the same five-man lineup at the regional that they employed at the SEC Championships two weeks ago in seniors Luke Long, Segundo Oliva Pinto and Julian Perico, and juniors Mateo Fernandez de Oliveira and Wil Gibson.