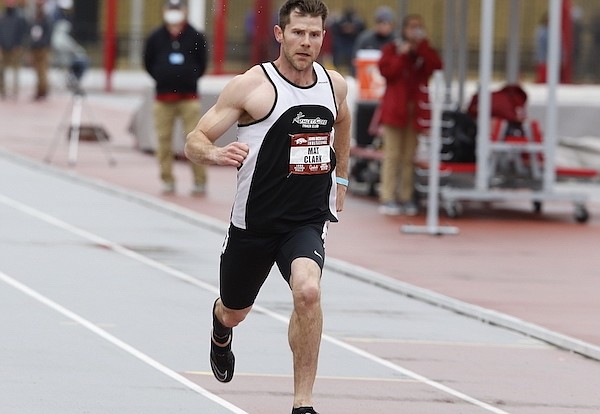 Mat Clark competes during the 2021 John McDonnell Invitational in Fayetteville.

FAYETTEVILLE — Five years after Mat Clark competed in the decathlon at the 2017 USA Track and Field Championships, details of the Achilles tendon injury the University of Arkansas strength and conditioning coach suffered remain fresh in his mind.

The injury happened as Clark ran the 110-meter hurdles — the decathlon’s sixth of 10 events — at Sacramento State’s Hornet Stadium.

“Going over hurdle six, my right leg landed a little awkwardly,” Clark said Wednesday. “I felt it pop. I tore my Achilles, and I thought it was game over for the decathlon.”

But Clark, a three-time All-American at Northern Iowa and two-time Drake Relays champion, didn’t give up hope of continuing to compete in the decathlon.

“One of my ultimate goals was I didn’t want the USAs where I tore my Achilles to be my last USAs,” he said. “So it’s fun to be able to give it one more shot.”

Clark, who turns 35 on May 31, will compete at the USA Championships for the fifth time when the decathlon is held Friday and Saturday at Arkansas’ John McDonnell Field.

The decathlon and women’s heptathlon are in Fayetteville this weekend — rather than during the USA Championships in Eugene, Ore., June 23-26 — so athletes who make the team will have more recovery time before the World Championships are held in Eugene July 15-24.

“I knew it would be a tough road back, because I tore my Achilles when I was 30,” Clark said. “I’d pretty much been told that was probably the end of the decathlon for me and to find something else to do.

“I had reattachment surgery and spent the next year and a half doing rehab for it. I took it a day at a time and I found myself running the workouts well and getting the strength back.

“I figured if I’m able to do it, the window is closing, so why not give it another try?”

Clark, who scored a career-best 7,785 points to win the decathlon at the 2009 Missouri Valley Conference Championships when he was a senior at Northern Iowa, said he’s fortunate to be competing this weekend.

If the decathlon was being held anywhere but Fayetteville, Clark’s duties as an Arkansas coach would prevent him from traveling with the SEC Championships being held next weekend as his top priority.

Clark also said that with the decathlon being held in early May rather than late June, several collegiate athletes who normally would be in the field aren’t competing because of conference meets later this month.

Former Razorback NCAA champion Taliyah Brooks, who will compete in the heptathlon this weekend, has worked with Clark for several years. He coaches her in the javelin as well as helping her with weight room workouts.

“I’ve been able to learn a lot from M.C.,” Brooks said. “Watching him do the workouts — making the time when he can to train — it’s inspiring to see. This is something he really wants to do, and he gets after it every single day.”

Clark, who works with the men’s and women’s teams, gets in his training between weight room sessions he plans and oversees for the Razorbacks. Sometimes Clark paces the middle distance runners in practice to get in his own workout.

“Every athlete can identify with Mat, because he does every event that they do,” said Lance Harter, coach of Arkansas’ women’s cross country and track and field teams. “He’s always there to help each and every one of those kids whenever they reach out.”

Chris Bucknam, coach of the Razorbacks’ men’s cross country and track and field teams, was Clark’s head coach at Northern Iowa for three years and hired him at Arkansas in 2012.

“Mat does a phenomenal job with our athletes, and he was an elite athlete himself in college,” Bucknam said. “He’s one of those guys that doesn’t seem to age. He stays fit, and he’s gifted.”

Clark said he’s able to train more efficiently because of his experience.

“All of my workouts, whether they’re in the weight room or on the track, are a minimized approach,” he said. “Just get right to the meat and potatoes of whatever I have that day and get after it.

“I don’t spend as much time doing technical work now as I did when I was younger, because a lot of that is muscle memory.”

Garrett Scantling, who will compete in Fayetteville this weekend after winning the decathlon at the U.S. Olympic Trials last year and finishing fourth at the Olympics, smiled when asked about Clark.

“This is a very, very mental sport, so that just shows how much mental toughness Mat has and how much dedication he has to the sport to still be competing,” Scantling said. “That’s something I admire.”

Scantling said Arkansas is fortunate to have Clark as a coach.

“I think that decathletes make the best coaches,” Scantling said. “They understand a lot about the body just because of what they put themselves through.

“Mat has experiences that many people don’t. That’s something you can’t teach and something that helps him in his field nowadays.”

Clark began competing in the decathlon the summer after his sophomore year at Ames (Iowa) High School.

“It was fun and it separated me from what everybody else I knew was doing,” Clark said. “It was uniquely mine where I grew up.

“Then I got to college and started having success with it. I made the World Junior Team in 2006 and was an All-American and competed in the [2008] Olympic Trials.

“The more success I had, the more my identity got wrapped up in it. Once that happened, the pressure just grew and grew and grew.”

Clark said he felt that pressure ease once he started working at Arkansas and no longer was consumed by competing as a decathlete.

“It allowed me to kind of push the reset button and return to the sport the way I got into it,” Clark said. “Which is, ‘This is fun. There’s nothing on the line here. I don’t have to keep doing this. Whether or not I do, it isn’t going to change my perspective on life.’ ”

Clark’s life perspective now includes being a husband and father. He and his wife, Abby, are parents to daughter Adeline, 4, and son Ford, 2. They’re expecting their third child this summer.

“So this could be my last one,” Clark said of this weekend’s decathlon. “If it is, I’m OK with that.”