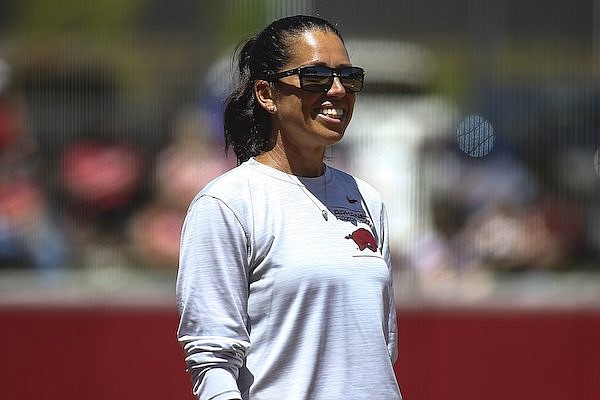 Arkansas softball coach Courtney Deifel is shown during a game against South Carolina on Saturday, April 30, 2022, in Fayetteville.

FAYETTEVILLE — The University of Arkansas can make history this weekend, but it will have to do what few Razorbacks softball teams have done historically against Texas A&M to pull it off.

The No. 5 Razorbacks have a chance to claim the program’s first outright SEC regular-season championship by winning just one of the three games of the weekend series that starts at 6 p.m. Central today at Davis Diamond.

In 21 previous meetings between the Razorbacks and the Aggies, Texas A&M holds a commanding 19-2 advantage, but the two programs enter the weekend from opposite directions. Arkansas carries an eight-game winning streak into today’s game including back-to-back series sweeps against Florida and South Carolina.

On the other extreme is Texas A&M, losers of five straight games including a pair of 3-2 losses to Houston on Wednesday after getting swept at Missouri last weekend.

Despite the downward spiral for the Aggies, Arkansas Coach Courtney Deifel is not overlooking the Razorbacks’ opponent.

“We’re not getting caught up in Texas A&M’s record, that’s for sure,” said Deifel. “They have a ton of talent. Jo [Evans] has always done a really good job of getting them ready.”

Arkansas (39-8, 17-4 SEC) has not lost an SEC series this season. The home sweep of South Carolina last weekend secured at least a share of the regular season SEC title, but the program has never won an outright league championship. The Razorbacks can take care of that this weekend.

Deifel said her team would be ready when the first pitch is thrown today.

“We don’t have to do too much with this team,” said Deifel when asked about having her team prepared. “The nice thing about them is we have not had to motivate them. They are extremely competitive. They will be ready to go.”

Texas A&M (27-23, 5-16) is trying to right a sinking season that looked promising after the Aggies won a home series against Alabama.

“It’s been a rough go the last five games,” said Evans. “We just continue to have challenges trying to find ways to win. It takes a hit on our players. It takes a hit on their confidence and their ability to bounce back. We went on the road and lost a couple which is really disheartening. Then we had eight players show up this morning for voluntary hitting and pitching. I’m proud of these kids for not giving up.”

National and league awards continue to spotlight the Razorbacks’ program. Senior Danielle Gibson this week was named a top 10 finalist for college player of the year honors, and senior pitcher Mary Haff was named the SEC Pitcher of the Week for the second time this season after her stellar performance against South Carolina. Senior Hannah McEwen was named SEC Player of the Week.

Haley Lee leads the Aggies’ offense after belting her team-leading 13th home run of the season on Wednesday.