Brooks in top 5 for USA heptathlon 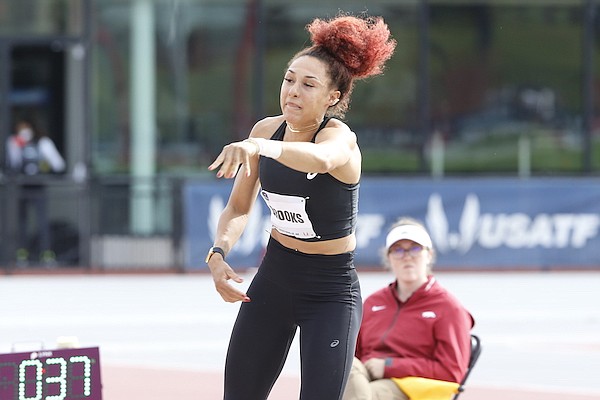 Taliyah Brooks competes during the USA Championships heptathlon competition at John McDonnell Field on Friday, May 6, 2022, in Fayetteville.

Brooks, a former University of Arkansas All-American who continues to live and train in Fayetteville, had a best mark of 42 feet, 11 3/4 inches in the shot put to help her be in fourth place through 4 of 7 events with 3,662 points.

Ryan Crouser, the Olympic winner in the shot put for the 2016 and 2020 Games as well as the world record-holder indoors and outdoors, lives in Fayetteville and began coaching Brooks in the event three months ago.

“I think I had the best coach out there for that event, and it definitely showed today,” said Brooks, who won the NCAA pentathlon championship in 2018. “I’m really grateful for Ryan. He’s helped me a lot.

“Last year we trained together through some sessions, and he gave me a lot of pointers.

“This year I went to Ryan and said, ‘Can you coach me up?’ We’ve been going strong twice a week.

“Sometimes he’s put his training sessions on hold to focus on me. I’m grateful he took me under his wing.”

Friday marked the first time Brooks has high jumped outside this year, and she’d had limited sprint work.

“I’m glad to be ending the day healthy. My foot is holding up. It’s doing OK.

“We’ll see how it goes Day Two, but my goal coming into it was to take it one event at a time and not worry about what the numbers say, and that’s what I’m doing.”

Florida sophomore Anna Hall, this year’s NCAA pentathlon champion, is the heptathlon leader with 3,781 points after running a personal best 23.14 in the 200.

Chari Hawkins is second in the heptathlon with 3,750 points and Michelle Atherley is third with 3,773.

Brooks is 122 points behind Hall. Two-time Olympian Kendell Williams is fifth with 3,659 points.

Garland finished second at the NCAA Indoor Championships in the pentathlon to Arkansas sophomore Ayden Owens, who is from Puerto Rico.

“I’ve never competed on this track before, but I’ve heard a lot of great things about the facility, and I was super excited to get out there,” Garland said. “To be able to put up 4,660, it’s a 200-plus point PR on Day One. So I’m in a beautiful position going into tomorrow.

“I’ve just got to execute. I’ve got to stay positive, keep my mind right and just have some fun.”

Garrett Scantling, last year’s USA champion who was fourth at the Olympics, is second with 4,503 points.

Mat Clark, Arkansas’ strength and conditioning coach for the men’s and women’s track and field and cross country teams, is 14th with 3,569 points.

“It’s hard when it’s your only meet of the year,” said Clark, a three-time All-American at Northern Iowa and two-time Drake Relays champion. “There are no tune-up meets for me, so everything feels rusty.

“But I’m on my feet. I made it through Day One without hurting anything. So on to Day Two.”

Clark is competing at the USA Championships for the fifth time, but first time since 2017 when he suffered a torn Achilles tendon.

“More than anything, I’m thankful to be able to compete on this stage again,” Clark said. “It’s hard not to compare myself to the way I was 10 years ago, because I’d be in a good battle, but it’s the reality now.

“I’m having a good time hanging around with the crew. That’s something I missed, was the camaraderie amongst all the athletes. So it’s good to be able to experience that again.”

In the collegiate portion of Friday’s competition, Arkansas freshman Britton Wilson won the 400-meter hurdles in a national-leading time of 55.41 and won the 400 in 50.97, which ranks No. 3 on the Razorbacks’ all-time list. She is Arkansas’ record holder in the 400 hurdles at 54.37.