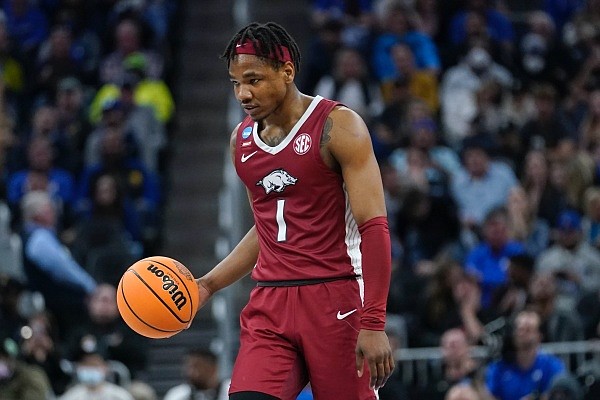 Arkansas guard JD Notae dribbles up the court against Duke during the second half of a college basketball game in the Elite 8 round of the NCAA men's tournament in San Francisco, Saturday, March 26, 2022. (AP Photo/Marcio Jose Sanchez)

FAYETTEVILLE — Former Arkansas All-American guard JD Notae has been invited to the NBA G League Elite Camp, a source with knowledge of the process confirmed to the Arkansas Democrat-Gazette.

The G League Camp will be held May 16-17 in Chicago with players who accepted invitations competing for NBA and G League scouts, coaches and front office executives.

Top performers from the G League Camp will be invited to participate in the NBA Scouting Combine, which also will be held in Chicago on May 16-22.

Arkansas forward Jaylin Williams, who entered his name for the NBA Draft but not signed with an agent to retain his eligibility, has been invited to the NBA Combine, WholeHogSports previously confirmed.

Notae, who has signed with an agent, averaged 18.3 points, 4.6 rebounds, 3.7 assists, 2.3 steals and 33.2 minutes last season when he was named a third-team All-American by The Associated Press and The Sporting News and voted a first-team All-SEC performer by the coaches and media.

Williams has until June 1 to withdraw his name from the draft, which will be held on June 23 at the Barclays Center, home of the Brooklyn Nets.

According to the Portsmouth Invitational website, Notae averaged 16 points, 9 rebounds and 4 assists per game. Umude averaged 12.3 points and 3 rebounds.