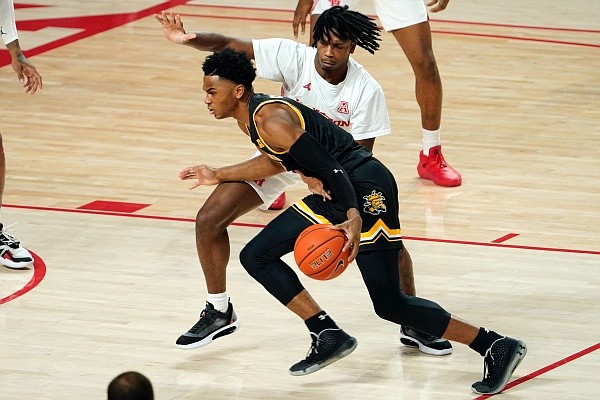 Arkansas coach Eric Musselman didn’t waste time reaching out to Wichita State transfer Ricky Council IV when he entered the NCAA transfer portal on April 21, and that helped the Razorbacks get an official visit this week.

“I entered the portal and Coach Muss called me like three seconds later,” Council said. “I didn’t know who it was, so when I heard Arkansas, obviously, I knew their tradition. Trey Wade played with us and I watched them play all year and obviously they made the Elite Eight and all that.

"Just his presence when I hit the portal and his communication with me. I had to take a visit, and everything he was saying was true. It’s amazing down here.”

He announced his top six of Arkansas, Iowa State, Kansas, Alabama, Mississippi State and Georgia Tech on Tuesday. He arrived in Fayetteville on Thursday evening and left around noon Saturday.

Council, 6-6, 204 pounds, was named the American Athletic Conference Sixth Man of the Year after starting 7 of 28 games and averaging 12 points, 5.4 rebounds and 1.6 assists.

“I’m a 3 man, 2 man,” Council said. “That’s what they’re recruiting me as, and that’s what they need for that last piece. My game, I’m just versatile. I can do a little bit of everything. My shooting percentage was the greatest this year, but coming into next year I know I can get much, much higher.

"I can shoot the ball, I can dribble, I can pass, I can rebound at a high level.”

He scored in double figures in 17 games and had a season-high 31 points in a 84-79 home victory over Central Florida on Jan. 26.

Council, who declared for the NBA Draft in March while maintaining his college eligibility, was impressed with Arkansas’ facilities.

“The facilities are crazy,” he said. “The craziest one might be the academic center. (The one) at Wichita State is nice, but this one is nice and is like 2-3 times bigger.”

He was named to the American Athletic Conference’s All-Freshman Team in his first season as a Shocker while appearing in 21 of 22 games with one start. He averaged 7.1 points and 3.4 rebounds while shooting 44% from three.

Council, who has three years of eligibility, felt his defense was lacking this past season, but Musselman and the staff reassured him.

“I realized after the season I wasn’t as healthy as I should’ve been as far as my knees,” Council said. “I felt like I could’ve been even better on the defensive end if that was the case. They showed me clips that my defensive efficiency wasn’t as bad as I thought. I was proud of that.

"I’m telling everybody now I’m trying to be the defensive player of the year wherever I go, so that’s going to be the next step.”

He will go home and figure out his next step in the recruiting process.

“(Sunday) will be a big thought process,” he said. “I’ll get back tonight, but I won’t start thinking about stuff like that tonight. I’ll decide if I’ll make any more visits or anything like that. That’s just the next step.”