Track teams go back to future 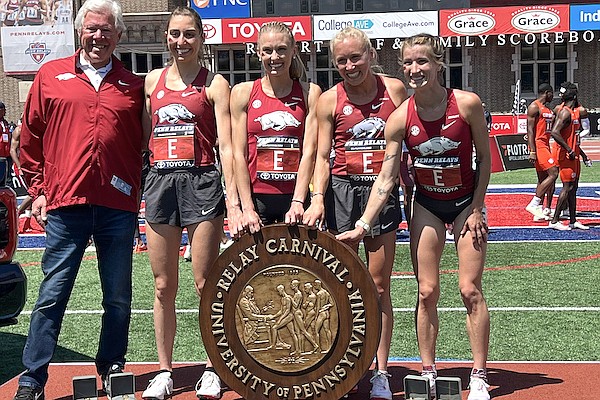 FAYETTEVILLE — One aspect very familiar to Arkansas Razorbacks men’s and women’s track and field and one aspect alien to the programs each manifest Saturday between last weekend’s Penn Relays in Philadelphia and the SEC Outdoor Championships running Thursday through next Saturday in Oxford, Miss.

Coach Lance Harter’s Razorbacks women and Coach Chris Bucknam’s Razorbacks men are back to the future ensconced at Penn. Last week they reestablished their Penn presence that was far too long absent even before the covid pandemic closed the entire meet for 2020 and 2021.

Penn was a building block in the late John McDonnell establishing Razorbacks men’s track and field as the greatest NCAA dynasty.

Harter’s women did much at Penn toward building their six national championships.

“The relay was very well serenaded. Media interviewed our kids over an hour. FloTrack did a big deal on their website and that’s just perfect for high school recruits. Hopefully that will pay dividends for us in the future.”

“It was great to be back, Bucknam said. “Renew old friendships. The ceremony where Graham Hood was inducted on to Penn’s Wall of Fame — certainly it opened our eyes up about returning there next year.”

Performing at Penn shouldn’t detract from defending their SEC titles next week, though for both it seems an unusually uphill climb, especially for the nationally No. 17 men if Benson remains out and medically redshirts.

“I assume we’re in the conversation but we’re certainly not favorites,” Bucknam said. “There are four teams ranked ahead of us. We’ve won five in a row and we’re going to try to win six, but I can’t guarantee it.”

Harter foresees a women’s four-team fight with nationally No. 2 Texas A&M, No. 3 Florida, No. 4 LSU and No. 6 Arkansas to the SEC finish.

“There are four teams on paper within 10 points of each other,” Harter said. “We’re not going in with anyone a hands-down favorite to win 10 (first-place) points. We’re going to have to earn what we get.”