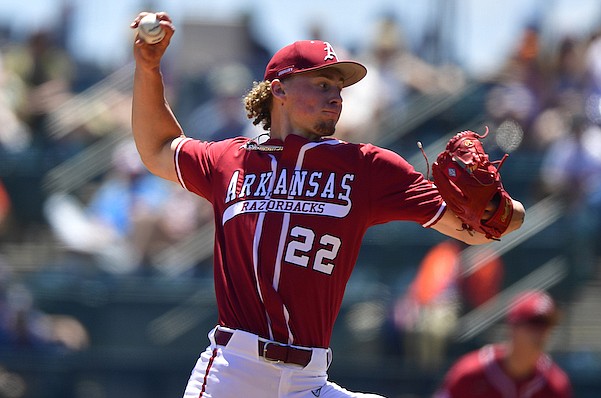 Arkansas pitcher Jaxon Wiggins throws during a game against Auburn on Sunday, May 8, 2022, in Auburn, Ala. (Matthew Shannon/Auburn Athletics)

Jalen Battles had a tough game defensively against Auburn on Sunday, but the University of Arkansas shortstop bounced back to start a double play to end the No. 3 Razorbacks’ 7-4 victory at Plainsman Park after the No. 18 Tigers got the tying run to the plate in the bottom of the ninth inning.

When Battles made an error — his second of the game, but just seventh of the season — trying to field a ground ball by Cole Foster, it resulted in Brody Moore scoring, Mason Land advancing to third base and Foster being safe at first.

“Honestly, I was just hoping they’d hit another one to him,” Razorbacks Coach Dave Van Horn said of Battles. “Because I knew he wouldn’t boot that second one.”

Van Horn got his wish.

The next batter, Blake Rambusch, hit a grounder to Battles, who fielded the ball and got it to second baseman Robert Moore for a force out on Foster. Moore then threw to first baseman Brady Slavens to get Rambusch by a half step.

“When the ball left the bat and it was headed to Battles, I was feeling pretty good.”

More from WholeHogSports: Matt Jones' analysis of Arkansas' series win over the Tigers

Arkansas starting pitcher Jaxon Wiggins (6-1) overcame a throwing error by third baseman Cayden Wallace in the first inning that led to two unearned runs on a two-run home run by Bobby Peirce that put the Tigers ahead 2-0.

After the home run, Wiggins allowed singles by Brooks Carlson and Brody Moore, but struck out Cam Hill to end the inning.

Wiggins, a hard-throwing sophomore right-hander who went a combined 3 1/3 innings in his previous two starts, settled in and went five innings. He finished with 6 strikeouts and over his last 4 innings held the Tigers to 1 run, 1 hit and 2 walks.

“I thought Wiggins, he battled through it,” Van Horn said. “We made an error in the first inning that probably cost him 10, 15 pitches, and it was a little frustrating.

“But he had a really, really, good outing for us. He gave us five strong innings.”

“I thought he had really good body language, even when we made an error behind him,” Van Horn said. “He didn’t show any emotion toward his teammate or feel sorry for himself.

“He just got back up on the mound and did a great job there. He’s worked really hard.

“Obviously, he’s been frustrated. He wants to help the team win. He did everything we wanted him to do today.”

The Razorbacks (36-12, 16-8 SEC) tied it 2-2 with two runs in the second inning when Braydon Webb singled and went to third on Jace Bohrofen’s double, then Battles had an RBI groundout and Wallace had an RBI double.

Arkansas went ahead 5-2 in the third inning on Webb’s three-run home run after Moore doubled and Kendall Diggs was ruled safe on an infield single on a video review.

Webb’s home run against Auburn starter Joseph Gonzalez went over the left field fence and was his team-leading 12th of the season. It came on the first pitch of the at-bat.

“It looked like the pitcher tried to sneak one by him, and he jumped all over it,” Van Horn said. “We knew it was gone right when he made contact. Just a really good swing.”

“I thought we had a really good game plan, plus he’s struggled a little bit against lefties and we loaded them up for the most part,” said Van Horn, who started a lineup of seven left-handed hitters along with the switch-hitting Moore. “They all did a good job.

“I think we frustrated him because we weren’t grounding out. He’s a sinker ball guy, likes to throw a lot of changeups, pitch backwards.

“He’s got his fastball, he threw it right at 90 [miles per hour], but maybe a little more here and there. It just seemed like we were seeing it good.

“We laid off some borderline pitches early in the count and, man, when we got a pitch to hit, we hit it good.

“They saw that, too. That’s why they got him out of there.”

After Webb’s home run, Auburn Coach Butch Thompson took out Gonzalez, who went 2 2/3 innings against Arkansas after going at least 6 innings in his previous five starts.

The Razorbacks had 9 hits in 17 at-bats against Gonzalez.

“Joseph was behind in the count,” Thompson said according to the Montgomery Advertiser. “I think that was the biggest thing. … I didn’t think we could go any further with Joseph today.”

The quick response with five runs in back-to-back innings against Auburn’s top pitcher to erase a 2-0 deficit was a huge boost for the Razorbacks.

“We definitely flipped the momentum to our dugout, I guarantee you,” Van Horn said. “Our guys, they were chirpy today, and I was good with it. I was glad they brought some energy, and it was fun to be a part of.”

Redshirt sophomore Will McEntire, a midweek starter the last four weeks, replaced Wiggins and went 3 1/3 innings in the first SEC game of his career. He didn’t allow a run or hit until the ninth inning.

“Will McEntire came in and did exactly what we were hoping he could do,” Van Horn. “I think he might have just run out of gas.”

Senior Evan Taylor came in for McEntire and got the double-play grounder to end the game and earn his second save.

All of Arkansas’ position players got on base as the Razorbacks combined for 13 hits, 6 walks and 2 hit batters.

Auburn closed within 5-3 in the third inning when Sonny DiChiara hit his second home run of the series and 15th of the season.

The Razorbacks added runs in the fifth inning on Wallace’s RBI double and in the sixth inning on Battles’ sacrifice fly to extend their lead to 7-3.

“It was really big to take two out of three,” Van Horn said. “It’s big for our confidence. It’s big for just winning on the road.”

The Razorbacks' week ahead