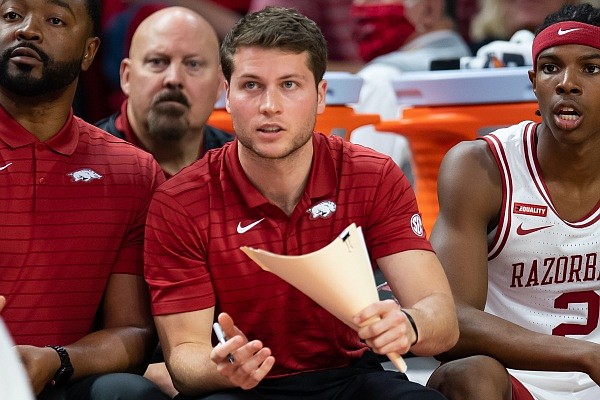 Michael Musselman is shown on the bench during Arkansas' season opener against Mercer on Nov. 9, 2021, at Bud Walton Arena in Fayetteville.

Arkansas has promoted Michael Musselman to director of basketball operations after serving three seasons as director of recruiting.

He added the title of assistant director of basketball operations for the 2021-22 season. He replaces Anthony Ruta, who was named an assistant coach shortly after Clay Moser resigned.

He will continue to lead the recruiting efforts while handling the day-to-day operations of the program. In Musselman’s three seasons in Fayetteville, Arkansas has recruited at a level not seen before.

The 2020 class was No. 5 nationally and featured the Razorbacks’ first one-and-done player in program history in guard Moses Moody. He was the No. 14 overall pick in the 2021 NBA Draft by the Golden State Warriors.

Smith finished ranked No. 3 nationally while Walsh is No. 11 and Black is No. 15.

The previous highest-ranked prospects to sign with the Razorbacks were Bobby Portis in 2013 and B.J. Young in 2011. Both were ranked No. 16.

Last season, Arkansas won 28 games, reached the Elite Eight and became the first team to ever beat an Associated Press No. 1 team during the regular season (Auburn) and NCAA Tournament (Gonzaga) in the same season.

Prior to Arkansas, Musselman spent one year as a graduate assistant at Nevada in 2018-19 while helping the Wolf Pack to a 29-5 record, a Mountain West Conference Championship and NCAA Tournament berth.

He previously served as a student manager at his alma mater, the University of San Diego. In his four years with the Toreros, he assisted the team in practice sessions, scouting reports, film editing and statistical analysis.

Musselman continues the coaching legacy that was started by his grandfather, Bill Musselman.