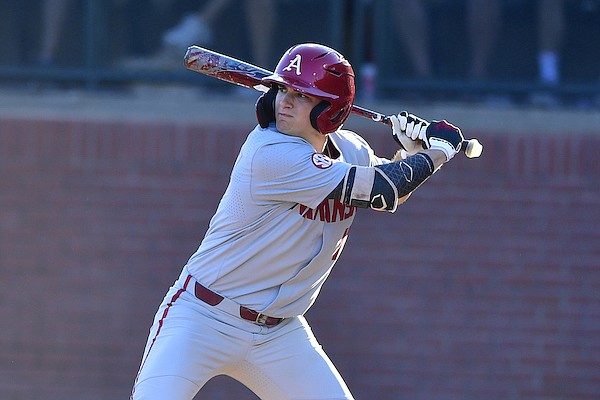 Arkansas' Brady Slavens bats during a game against Auburn on Saturday, May 7, 2022, in Auburn, Ala. (Jacob Taylor/Auburn Athletics)

FAYETTEVILLE — A series win at Auburn over the weekend strengthened the University of Arkansas’ Ratings Percentage Index by eight slots, and more importantly kept the Razorbacks two games out front in the SEC West race with two weekends remaining in the regular season.

The Razorbacks (36-12, 16-8 SEC) lead LSU and Texas A&M by two games and Auburn by three games with six to play, and they’re four games behind No. 1 Tennessee in defense of their overall SEC crown.

The Razorbacks fell one spot to No. 4 in the USA Today Coaches poll after going 2-2 on the week, but just winning two road games against the Tigers, who were No. 4 in the RPI last week, allowed Coach Dave Van Horn’s team to move up to No. 20 in that metric.

Arkansas gets another prime opportunity for an RPI injection this week with a visit from No. 21 Vanderbilt, which jumped to fourth in the RPI rankings after a series win at Georgia.

The Razorbacks wrap up with Vanderbilt and then at Alabama, while Texas A&M hosts Mississippi State and travels to Ole Miss; LSU hosts Ole Miss and travels to Vanderbilt; and Auburn hosts Alabama before finishing at Kentucky.

Led by a noteworthy Sunday start from sophomore right-hander Jaxon Wiggins (6-1), Arkansas snapped a streak of two consecutive road series losses — at Florida and Texas A&M — in which both series finales were tight, high-scoring affairs won by the home team.

“I mean, we finally won a road series and we’ve been coming close, playing tight games,” Van Horn said after Sunday’s 7-4 win in the clincher. “We just didn’t give up a big inning. That’s kind of probably been the issue, giving up what I call big crooked numbers, not two, but maybe four or five. We didn’t do that [Sunday].”

A key development for Arkansas was a five-inning start for Wiggins after he gave up a two-run home run to Auburn outfielder Bobby Peirce, following a Cayden Wallace throwing error, and two more hits in a rocky first inning.

“One of the biggest things for us was Jaxon getting out there and pitching well,” Arkansas pitching coach Matt Hobbs said Monday. “Going out and giving up those two [runs] early and then giving up another couple of knocks right after, it looks like it’s about to come off the rails.”

Particularly since Wiggins lasted just 3 1/3 innings in his last two starts combined — a loss at Texas A&M and a no-decision against Ole Miss in which he allowed a total of 6 runs, 4 earned, on 6 hits and 6 walks, while striking out 3.

“He really rights the ship and does a great job for five innings against a really good lineup,” Hobbs said. “It was big for the kid, honestly, as he’s been through the ringer the last few weeks. It’s no secret.

“But he’s worked, put his head down and done a great job in terms of handling all the on the field and off the field stuff. I’m just really proud of Jaxon. I think everybody on the staff is too.”

The Razorbacks committed six errors, including three on Sunday for their highest total of any weekend this season, to give up five unearned runs in the series and drop their fielding percentage to a season-low .982.

“We made a few more errors than normal this weekend, and I really don’t know why,” Van Horn said.

They made up for the miscues with better hitting and 21 runs, their second-highest weekend total behind 23 runs against Mississippi State on April 1-3.

Designated hitter Kendall Diggs did not tear it up from a hits standpoint (2 of 11, .182) but he scored 4 runs, reached base 3 extra times on 2 walks and a hit by pitch, and provided the go-ahead home run in the seventh inning of Friday’s 11-8 come-from-behind win.

Clean-up hitter Brady Slavens hit .300 with a double and drove in a run, and Zack Gregory (.167) reached base four times and scored two runs in his two starts.