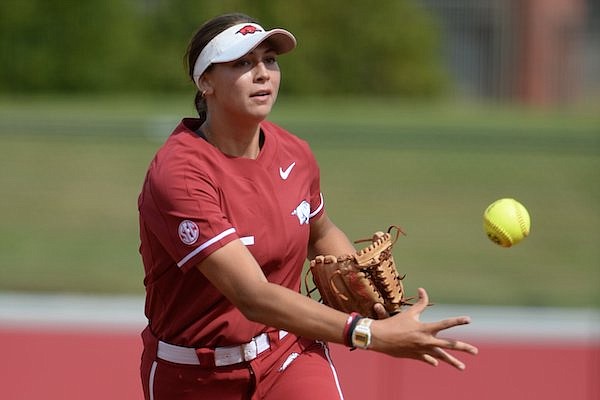 Arkansas' Spencer Prigge tosses the ball to the mound after making a catch Saturday, Oct. 9, 2021, during play against Butler Community College at Bogle Park in Fayetteville.

University of Arkansas shortstop Spencer Prigge was named the SEC Freshman of the Week after helping the Razorbacks capture their first outright SEC regular season title over the weekend at Texas A&M.

Prigge went 3 for 9 and recorded her second career home run in the series win. She registered a .667 slugging percentage and .455 on-base percentage. She also had four putouts and nine assists.

Arkansas has compiled a conference-best nine SEC weekly honors throughout the 2022 regular season.

The Razorbacks travel to the Gainsville, Fla. for the SEC Tournament at Katie Seashole Pressly Stadium. Arkansas, the No. 1 overall seed, will open the tournament at 6:30 p.m. Central on Thursday against the winner of Georgia vs. Ole Miss. The game will be broadcast on SEC Network.