Bet on Razorbacks being a team to watch 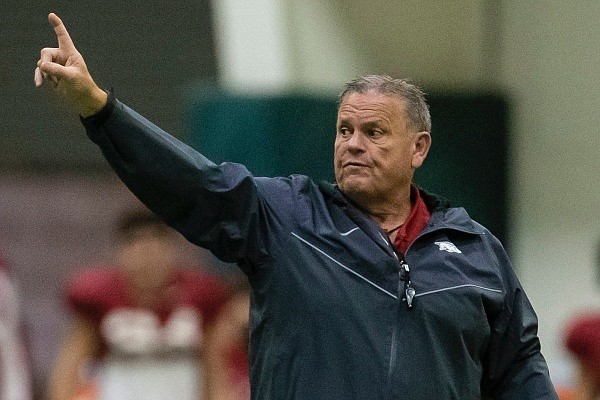 It is almost amazing what a transformation Sam Pittman has made in the perception of Arkansas Razorback football.

Just two years after the Hogs were facedown in the cellar of the SEC West, winless in conference play for two seasons, they are now being mentioned as a team to watch for the upcoming season.

A story by Shehan Jeyarajah on CBSsports.com on Tuesday mentioned Arkansas as one of five teams who could take Cincinnati’s place as the darkhorse to make the College Football Playoff.

Granted, oddsmakers have the Razorbacks at 125-1 to win the national championship, but their tough schedule that includes hosting Cincinnati should carry some serious weight with the playoff committee, provided, of course, they win.

Those odds are from Caesars Sportsbook.

Odds will vary from sportsbook to sportsbook, and it would be likely the Razorbacks have lower odds to win the championship at Oaklawn Racing Casino Resort, Saracen Casino Resort or Southland Casino, where Razorback fans would bet the odds down.

Apparently, Saracen is now up and running with a mobile app.

Online sports wagering became legal in Arkansas in March when the legislature approved it.

On Saracen’s app, as well as Southland’s, and if and when Oaklawn is in the game, bets can only be made within the state of Arkansas.

If that seems restrictive, it may have something to do with keeping the national and international competition from invading Arkansas, where only three facilities are allowed to have gambling.

When a Churchill Downs official told NBC that Bob Baffert’s suspension was the culmination of issues that began with the Kentucky Oaks in 2020, it hit a note, but not a clear one.

Gamine, trained by Baffert, ran third and tested positive for a trace of a banned substance.

A little more than three months earlier, Gamine won an allowance race at Oaklawn and also tested positive for a trace of a banned substance.

That same day, at great expense, Oaklawn ran two divisions of the Arkansas Derby because so many tracks were closed. Charlatan, trained by Baffert, won a division but tested positive for a banned substance.

It is always small amounts, but still against the rules.

Anyway, the winning trainer of Shedaresthedevil in the 2020 Oaks was Brad Cox, not Baffert, as reported here Sunday.

Cox, at age 42, has become considered one of the best trainers in the country and regularly runs at Oaklawn.

Bill Ingram, athletic director at Arkansas Baptist College, has announced a new men’s basketball coach, and it seems like a natural fit.

Eric Bozeman is taking over the men’s basketball program, and the native Arkansan has tons of experience as a head coach and top assistant at Ole Miss.

Bozeman has been the women’s basketball coach at Northwestern Oklahoma State, but prior to that he spent more than 30 years coaching men.

Bozeman was a team captain during his playing days at Arkansas Tech and went to work as an assistant coach after graduation at Henderson State, where he got his master’s degree.

He spent several seasons with Rod Barnes, at Ole Miss and then became the head coach at Southern Arkansas for 12 years.

His son Solomon is the men’s head coach at the University of Arkansas-Pine Bluff.