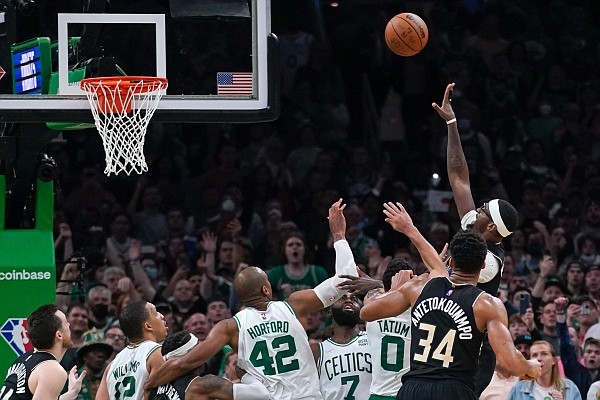 Milwaukee Bucks center Bobby Portis, right, makes a go-ahead shot after grabbing a rebound following a missed free throw by Milwaukee Bucks forward Giannis Antetokounmpo (34) during the final seconds of play against the Boston Celtics during the second half of Game 5 of an Eastern Conference semifinal in the NBA Playoffs on Wednesday, May 11, 2022, in Boston. (AP Photo/Charles Krupa)

Thanks in large part to Bobby Portis’ clutch putback in the final seconds of Wednesday’s Game 5 against the Boston Celtics, the Milwaukee Bucks are now one win shy of reaching the Eastern Conference Finals.

Tipping the ball to himself several times before corralling possession, Portis grabbed his seventh offensive rebound and 15th rebound in the game and, under control, kissed a nine-foot floater off the glass for the go-ahead score. A pair of standout defensive plays from Jrue Holiday sealed the 110-107 road win.

"I ain’t going to lie, growing up as a kid, I really wasn’t ever skilled or really had like one thing that I really did well," Portis told reporters. "I was always like a Jack of all trades, did everything good, but nothing great. But one thing I always did was have a high motor, big energy.

"My mom always told me as a kid just to be a garbage man. Being a garbage man means if you want scoring opportunities if you’re not getting the ball passed to you, you go get the ball off the offensive glass.

"That’s one thing my mom always taught me, so shoutout to my mom on that."

Antetokounmpo praised Portis' effort on the TNT broadcast moments after the final buzzer.

“He’s going to keep playing well,” Antetokounmpo said. “He’s ready, ready to compete. I love playing with him. I love being out there with him.

“He always gives his all for the team."

The Bucks will return to Milwaukee for Game 6 on Friday. It will air on ESPN.

Portis finished the night with 14 points on 4 of 14 shooting, including 0 of 2 from three-point range, 15 rebounds, 2 assists and 1 steal in more than 28 minutes in the lineup. Milwaukee was plus-2 in Portis’ run.

He was also 6 of 6 at the free throw line, and his seven offensive rebounds were more than all but two Boston players had total rebounds.

Portis made another crucial play in the final minute of the fourth quarter before his game-winning shot and after an 0-of-3 shooting start to the period. As the Bucks trailed 105-102, he assisted on a Holiday three-pointer to tie the game with 42.4 seconds left.

Through five games against the Celtics, Portis is averaging 11 points and 9.4 rebounds. And Wednesday was something of a bounce-back offensive effort after adding a combined 13 points and 13 rebounds in Games 3 and 4.

During Milwaukee’s playoff run, he is putting up 11.3 points and 10.4 rebounds.

"I kept grinding, kept staying with it, never giving up. Now I’m in a good position, playing on a championship team with championship aspirations.”