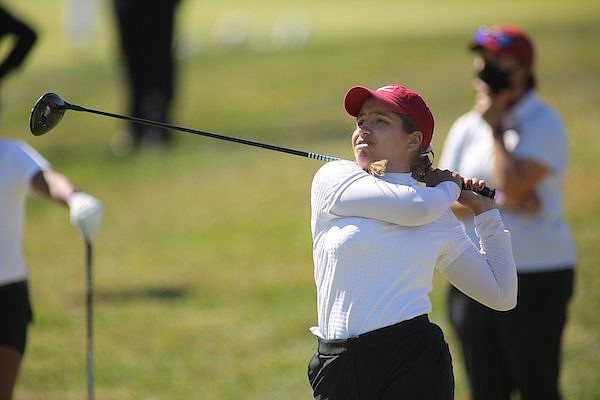 The No. 20 University of Arkansas women’s golf team slid backward all day in the third round of the NCAA Ann Arbor Regional but managed to hang on down the stretch to earn a spot in the NCAA championships.

The Razorbacks carded a 14-over par 287, their worst round of the regional by seven shots, but tied host and No. 18 Michigan at 28 over for third place on the par 71 University of Michigan Golf Course.

Coach Shauna Taylor’s Razorbacks qualified for the program’s 12th NCAA championship and their first since the 2019 team made the final eight while hosting at The Blessings Golf Club in Johnson.

Top seed and No. 5 San Jose State fired its second even-par round in a row to overtake No. 8 Virginia and win the regional at 10 over. The No. 8 Cavaliers were second at 13 over, 15 shots ahead of the Razorbacks and Wolverines, who shared the final qualifying spot.

The top four teams from each of the six regionals will make up the 24-team field at the NCAAs in Scottsdale, Ariz. on May 20-25.

Arkansas opened the day with an 18-shot advantage over fifth-place Virginia Tech. The Hokies, teeing off an hour earlier than the Razorbacks, attacked the course and gained ground throughout the round, eventually closing to within three shots.

Virginia Tech carded a 5-under 279, the best round at the regional, and reached the clubhouse at 31 over.

San Jose State’s Natasha Andrea Oon shot 68 on Wednesday to run away with the medalist title at 6 under, five shots clear of Virginia Tech’s Emily Mahar.

Junior Ela Anacona led the Razorbacks with a 2-over 73 on Wednesday, and her final score of 2-over 215 was good for a tie for fifth place with three other golfers. Junior Julia Gregg had a key birdie on the par 4 17th and posted a 3 over on Wednesday.

Gregg claimed 15th place at 6 over for the tournament.

The Razorbacks’ other counting scores came from junior Kajal Mistry and sophomore Miriam Ayora with rounds of 75 and 76, respectively. Ayora, who played the final seven holes at 1-under par, tied for 19th at 9 over.

Mistry, who had a team-high two birdies on Wednesday, tied for 32nd place at 13 over.

Arkansas’ non-counting score was freshman Ffion Tynan’s 8-over 79, which landed her in a tie for 43rd at 17 over.