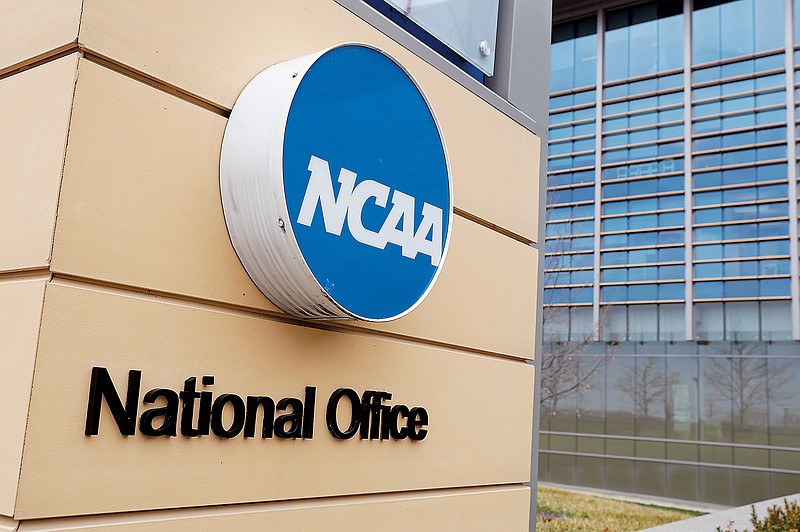 In this March 12, 2020, file photo, signage outside at the headquarters of the NCAA is viewed in Indianapolis. (Associated Press)

If you thought name, image and likeness was confusing and ridiculous by ruining college athletics, it is going to get worse.

The NCAA, which ignored NIL issues until the Supremes ruled they couldn’t ignore it and said players deserved compensation, is suddenly trying to regulate the process.

It has determined that schools that have collectives — businesses coming together to help finance NIL deals — are in violation of NCAA rules.

Collectives — by the NCAA’s interpretation — are boosters.

Most of the colleges and universities which can afford to provide NIL deals wisely made the decision in the beginning that if a business was going to be associated with the players that it needed to be a business that was involved with the school.

A business that donates to scholarship funds and buys tickets.

Or, by NCAA definition, a booster.

If the schools didn’t limit who can be involved, they stood to lose tons of money because a business might decide instead of donating to scholarship funds, they could go directly to the better athletes in the country.

Athletics on too many levels has long left sportsmanship in the dust and works at a win-at-all-costs level.

A story in Wednesday’s Arkansas Democrat-Gazette quoted Blake Lawrence, co-founder and CEO of a company that helps athletes negotiate deals and test the waters at schools, predicted the minimum NIL deal would soon be $50,000 per year.

Consider the 2020 Census determined the average income for an Arkansas household was a little more than $27,000 per year.

Some coaches and administrators realize the NIL deals are out of control.

Last year, Alabama’s Nick Saban, the face of college football whether he or anyone else likes it or not, bragged that his freshman quarterback, who had never taken a collegiate snap, had $1 million in NIL deals.

Ohio State was at least one other school that has reported that it had a million dollar quarterback.

The reports were collectives at A&M may have shelled out $30 million for the freshman football class.

Saban then said that the current NIL structure was not sustainable and changes were needed.

The main problem with where the NIL deals are and where they are headed is there were no rules when it began.

Anyone who even remembers the old Southwest Conference — where in the 1980s every school but Arkansas and Rice were investigated by the NCAA for recruiting violations — is not surprised the Aggies were No. 1 in recruiting after the first recruiting class with NIL deals was finished.

The NCAA has a lame duck president in Mark Emmert, and the timing seems odd that the organization is finally trying to regulate NIL deals after he announced that he was retiring.

Who knows if the NCAA as a governing body of college athletics will even exist in a few years?

It seems like the Power 5 conferences are trying to get away from an organization where every member’s vote counts the same. Those leagues appear tired of sharing the golden goose with smaller programs.

What the Supremes failed to realize is that the schools who could do NIL deals were basically limited to the handful of already rich and powerful schools.

It feels like the NIL situation is going to get worse before it can even attempt to get better.