Razorbacks finding success at the plate 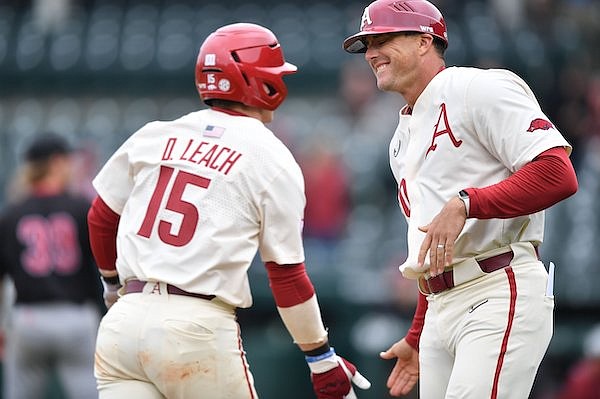 FAYETTEVILLE — Arkansas’ lineup appears to be heating up with the weather this spring.

Beginning with an 11-10 loss at Texas A&M on April 24, the Razorbacks are averaging 9.7 hits and 6.1 runs in their last 7 conference games against the Aggies, Ole Miss and Auburn.

Compare that to 7.9 hits and 4 runs in the 7 SEC games that preceded the series finale at Texas A&M, a stretch that included two games against the Aggies and Florida, and three games against LSU.

LSU ranks third this season in conference-only ERA. Texas A&M, Ole Miss, Florida and Auburn are middle of the pack in the SEC in team ERA.

Arkansas is coming off of a 21-run, 26-hit series at Auburn that also included 15 walks. Arkansas hit eight doubles and four home runs during the series.

The overall series numbers on the road are more notable when you consider the Razorbacks had only three hits during their lone loss at Auburn, 5-3 last Saturday. In the two victories over the Tigers, Arkansas won 11-8 and 7-4, and had double-digit hit totals in both games.

The Razorbacks also had sacrifice flies in all three games. Twice they had fielder’s choice groundouts that scored runs.

That type of situational hitting has been an area of emphasis after the team struggled to drive in runs in April.

“We’ve talked all season about how everything that happens to us, whether it’s something enjoyable or not, is for our benefit if we choose for it to be,” Arkansas hitting coach Nate Thompson said. “It’s a learning opportunity and something we can use to enhance our performance at the end. I think a lot of those experiences that we’ve been going through are things that we’re trying to use now to be at our best.”

Thompson said the team discussed adjustments when it failed to score a run from third base late in three tight games during a four-game stretch against Texas A&M and Central Arkansas.

“We as an offense spoke about that and we said, ‘Hey, you know what, we didn’t get the job done right there, but we’re going to learn from this and in the long term this is going to be something that’s good for us,’” Thompson said.

“We were just trying to make things more clear from a mental and physical approach standpoint in those types of moments to where the guys don’t feel like they have to do too much. The pitcher’s not just going to give in and there’s pressure to drive in those runs.”

Thompson and Arkansas coach Dave Van Horn said this week they were happy with how the team hit during the Auburn series. Both coaches commented on a good approach by the hitters throughout the lineup.

“It kind of felt like we were locked in and were seeing the ball real well,” Van Horn said. “I feel good about where we’re at offensively.”

Thompson said hitters have been looking to drive the ball more early in counts in the last two series. He said opposing pitching has given the hitters an opportunity to do that.

“I think we’re building right now toward more of what we’re capable of,” Thompson said. “Maybe we’re a little more aggressive on the pitch we need to be and more patient in some other times, and just grinding out some more at-bats. When we get our pitch, maybe we’ve been doing  a little more damage on it, and that’s a big deal, that when you get the pitch you’re ready and not missing it. I think the lineup is coming along and getting more confident as we go. It’s moving in the right direction.”

Thompson said he was happy the team scored in different ways at Auburn, but said a home run is always nice to see.

“I’d rather those balls go out of the park than bang off the wall and one less run scores on those swings,” Thompson said. “The guys are just going up there looking to put their best swing on a ball and hit something hard. If it happens to go off the wall or go over the wall, we’re good with it either way.”

Arkansas’ lineup has included production in recent weeks from left-handed hitters Kendall Diggs and Jace Bohrofen. Diggs had the game-winning three-run home run against Ole Miss on April 30 and the go-ahead three-run homer at Auburn last Friday. Bohrofen had a key two-run home run that sparked a comeback in the first game against the Tigers and a second-inning double that led to a run in the series finale.

Bohrofen enters this weekend’s series against Vanderbilt with hits in 5 of 6 SEC games. Diggs has a hit 3 of 5 conference games since he was inserted into the lineup for the April 30 game against Ole Miss.

Thompson said the lineup is tailored each game to the opposing team’s starter. He indicated Chris Lanzilli was held out of a couple of games at Auburn based on matchups, such as last Friday when splits for left handers were 103 points higher than right handers against Auburn starter Mason Barnett. The Razorbacks started five left handers and a switch hitter that night.

Lanzilli, who bats from the right side, has the team’s second-best batting average of .314. Van Horn said Lanzilli will be in the lineup some this weekend against Vanderbilt, which is scheduled to start freshman left handers Devin Futrell on Friday and Carter Holton on Sunday.

“It’s a good problem to have, so to speak,” Thompson said of having capable hitters who might not start. “It’s all going to come down to what matchups we see and what we think is going to compete best that day against that guy.”

Recent production and a deeper bench has Thompson feeling good about his group.

“We know what we’re capable of and we feel like we’re advancing toward that, and that’s the most important thing,” Thompson said. “We’re not a finished product. As long as we just keep marching toward that, it’s all good.”