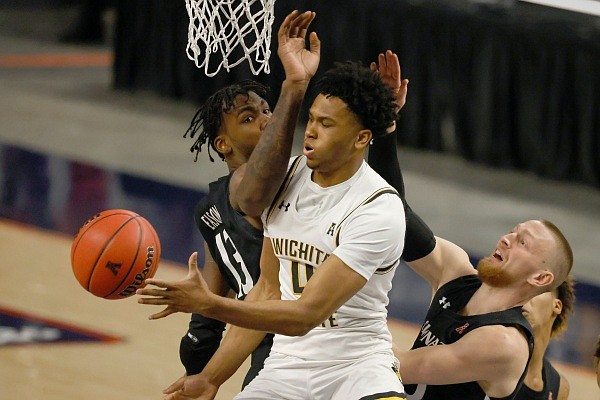 Wichita State transfer Ricky Council IV has committed to Arkansas and gives the Razorbacks five transfer additions for next season.

“I’m a 3 man, 2 man,” Council said last Saturday after his visit to Fayetteville. “That’s what they’re recruiting me as, and that’s what they need for that last piece. My game, I’m just versatile. I can do a little bit of everything. My shooting percentage was the greatest this year, but coming into next year I know I can get much, much higher.

"I can shoot the ball, I can dribble, I can pass, I can rebound at a high level.”

He scored in double figures 17 times and scored a season-high 31 points in a 84-79 home victory over Central Florida on Jan. 26.

Council, who has a 6-10 wingspan, declared for the NBA Draft in March while maintaining his college eligibility. He has three years of eligibility at Arkansas.

He joins former Arizona State forward Jalen Graham, former Missouri forward Trevon Brazile and former Rhode Island forwards Makhi and Makhel Mitchell as players who have committed to the Razorbacks since they were eliminated by Duke in the Elite Eight of the NCAA Tournament.