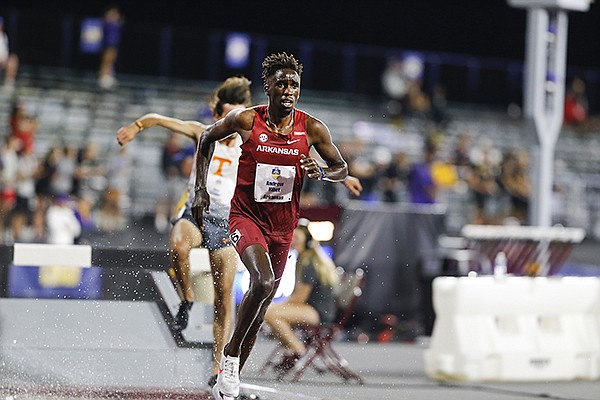 FILE — Arkansas' Andrew Kibet competes in the steeplechase on Friday, May 14, 2021, during the SEC Outdoor Track and Field Championships in College Station, Texas. (Photo by Robert Black, via Arkansas Athletics)

Arkansas junior Andrew Kibet was focused on winning the 3,000-meter steeplechase Friday night at the SEC Outdoor Track and Field Championships in Oxford, Miss., rather than running a personal-best time of 8:42.87.

“Just the title,” Kibet said in an interview posted on the Arkansas track and field Twitter account when asked about his time. “[Being] the SEC champ."

Kibet, who finished second in the steeplechase at last year’s SEC Championships, won Friday night by more than five seconds over Alabama freshman Hillary Cheruiyot, who took second in 8:48.67.

“Our plan was to give it our all,” Kibet said. “And I’m so happy for my teammates, for all of us to score.”

Arkansas won 15 SEC steeplechase races since 1995 — when Godfrey Siamusiye won his first of two — and five in the last eight years with Kyle Hosting in 2018 being the most recent Razorback champion prior to Kibet.

The Razorbacks also scored well in the decathlon, which wasn’t finished until 1 a.m. Saturday after the meet schedule was delayed by six hours because of lightning.

Through seven finals scored Arkansas is in third place in the team standings with 45 points behind Tennessee (55) and Alabama (54).

In women’s competition Friday night, Arkansas seniors Logan Jolly and Krissy Gear came through with 11 points in the steeplechase.

Arkansas is seventh in the team race through eight finals scored with 22 points. Auburn leads with 36 points with Florida second (32) and Texas A&M third (28).

Arkansas sophomore Britton Wilson ran 51.20 to lead all qualifiers into the 400 final after she had the top time in the 400-meter hurdles Thursday night and broke her own UA record by running 54.23.

Also advancing to the 400 final for the Razorbacks were freshman Rosey Effoing (51.75) and senior Morgan Burks-Magee (52.22).

Senior Jada Baylark ran 11.56 to advance to the 100 final after she advanced in the 200 on Thursday night.

Arkansas junior Yoveinny Mota ran 13.09 in the 100-meter hurdles to advance to the final.