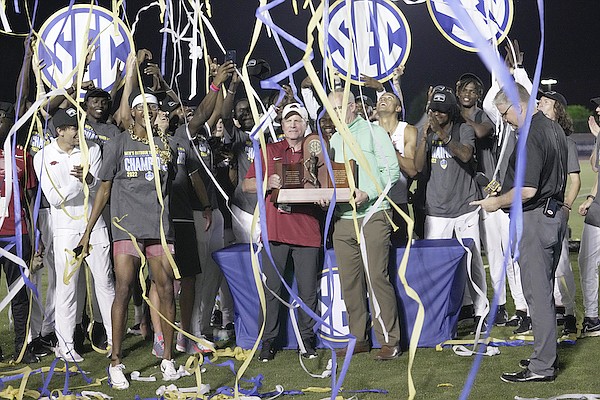 Arkansas coach Chris Bucknam is presented the SEC championship trophy from commissioner Greg Sankey on Saturday, May 14, 2022, in Oxford, Miss.

The University of Arkansas men and Alabama both had three scorers in the 5,000 meters on Saturday night at the SEC Outdoor Track and Field Championships at Oxford, Miss., but the Razorbacks finished at the top.

The No. 18-ranked Razorbacks scored 24 points in the 5,000 to overtake the No. 2 Crimson Tide for the team lead in the meet’s next-to-last event and won the title with 120 points.

Arkansas led the Tide 118-108 going into the 1,600 relay and finished seventh to clinch the outright title. Alabama was third in the relay.

“Each morning we had a plan and we executed and we competed like crazy,” Arkansas Coach Chris Bucknam said of the three-day meet in an interview with the SEC Network. “I’m really, really proud of these guys. It was a true team effort.”

Arkansas won its 21st SEC Outdoor title and its second consecutive Triple Crown with championships in cross country and indoor and outdoor track in the same school year.

Florida edged Arkansas for the women’s team title, 107 points to 103.

Arkansas sophomore Britton Wilson became the first female to win the 400 meters and 400-meter hurdles at an SEC meet.

To cap her performance, Wilson anchored Arkansas to a third-place finish in the 1,600 relay in 3:22.55 running along with senior Morgan Burks-Magee, freshman Rosey Effoing and senior Jada Baylark.

Florida took fifth in the relay in 3:26.85 to hang on for the team victory.

The Razorbacks came into the meet with the eighth-best time in the 400 relay in the conference, but the team of senior Roman Turner, freshman Connor Washington, Owens-Deleme and Lemonious finished second in 39.24 behind Florida (38.66).

LSU and Alabama, which had the second- and third-fastest times in the SEC coming into the meet, dropped the baton and failed to score.

The Razorbacks scored well in the decathlon, which wasn’t finished until 1 a.m. Saturday after the meet schedule was delayed by six hours because of lightning.

CORRECTION: A scoring change by the SEC following the 1,600 relay caused scores that were initially reported to be incorrect. Those scores have been corrected in this story.