Arkansas' Wilson could not be caught 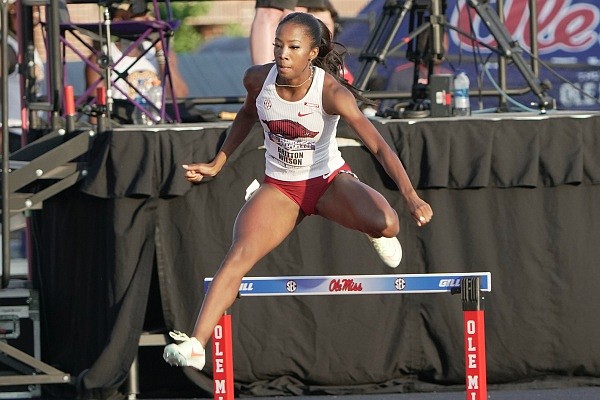 Arkansas runner Britton Wilson set a school record in the 400-meter hurdles for the third time this season with a time of 54.23 seconds Saturday at the SEC Outdoor Championships in Oxford, Miss. Wilson also bested the Ole Miss Track and Field Complex facility record of 54.50, which was set in 2001.

FAYETTEVILLE — In the first 41 years of the women’s SEC Outdoor Track and Field Championships from 1981-2021, no athlete won the 400 meters and 400-meter hurdles at the same meet.

University of Arkansas sophomore Britton Wilson changed that in a big way on Saturday in Oxford, Miss.

Wilson became the first female to win both events at the same SEC meet and did so in record-setting fashion.

The Wildcats and Aggies both bettered the previous collegiate record of 3:22.34 by Texas A&M in 2021.

No male athlete has won the SEC 400 and 400 hurdles since 1977 when the conference changed from yards to meters. The only male who won the 400-yard dash and 400-yard hurdles before the metric change was Auburn’s David Atkins in 1966 — the year the 400-hurdles race was added.

“Britton Wilson, my gosh, that’s unbelievable what she just did,” Arkansas Coach Lance Harter said. “Unless you witness it, you think, ‘That’s impossible. That can’t happen.’

“But she and Chris Johnson just have this perfect formula and they did a phenomenal job.”

Johnson is the Razorbacks’ sprints coach and is set to succeed Harter, who will retire after the 2023 outdoor season.

Wilson has flourished working with Johnson since transferring to Arkansas this year from Tennessee.

“What Chris and Britton can do together is magic,” Harter said. “I mean, absolute magic.”

Wilson’s performance helped No. 5-ranked Arkansas score 103 points and take second in the team race behind No. 3 Florida, which won with 107.

Since the start of the 2013-14 school year, Florida is the only women’s team to win an SEC cross country or indoor and outdoor track and field title other than Arkansas.

The Razorbacks have won 23 of a possible 26 conference championships in that span with Florida winning three (2014 indoors and 2018 and this year outdoors).

“To have the string of championships that we’ve been able to put together since the fall of 2013, we’ll take that,” Harter said. “Every one of these SEC meets is a battle, so to do what our kids have over a long period of time is remarkable.”

“Our kids just fought their tails off,” Harter said. “We identified in our [Saturday] morning meeting that it could be a two- to five-point meet, and we could be on the sunny side of it or the dark side of it.

“Florida was able to score some points in events where we didn’t expect, and that was the difference.”

“I’ve been working for this,” Wilson said in an interview with the SEC Network. “I’m just really glad I got the opportunity to show everyone what I could do.”

Harter, in his 33rd year at Arkansas and 44th as a college head coach, said what Wilson did at the SEC meet was as good a performance as he’s seen from a collegiate athlete.

“It’s got to be No. 1,” Harter said. “What she did was absolutely phenomenal. I’d venture to say it compares to anybody in the history of collegiate track and field.

“I’m glad I was able to witness it, and I’m glad that she wears the Razorback uniform.”