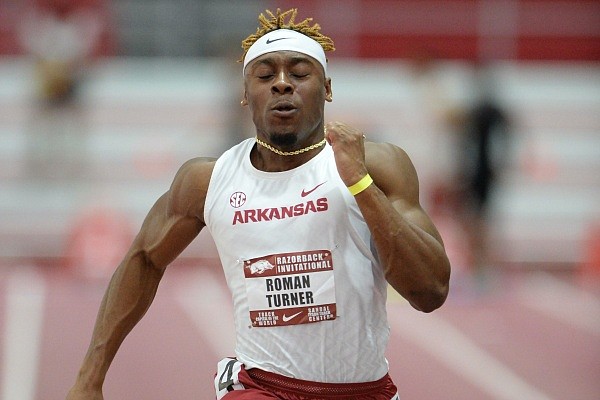 Arkansas' Roman Turner competes Saturday, Feb. 1, 2020, in the 60 meters during the Razorback Invitational in the Randal Tyson Track Center in Fayetteville.

FAYETTEVILLE — The start of Saturday’s competition at the SEC Outdoor Track and Field Championships couldn’t have started much better for the University of Arkansas men’s team or worse for Alabama.

The No. 2-ranked Crimson Tide, favored to win the meet, dropped the baton in the 400-meter relay and failed to score.

It was a stunning reversal of fortune considering Alabama came into the meet with the No. 3 time in the conference in the relay and Arkansas with the No. 8 time.

Based on those seedings the Tide should have outscored the Razorbacks 6-1 in the event, but Arkansas came out with an 8-0 edge.

That 13-point swing loomed large when the Razorbacks won the team title 120 to 114 over Alabama at the Ole Miss Track and Field Complex in Oxford, Miss.

“What happened in the relay to start the day was hugely significant for us,” Arkansas Coach Chris Bucknam said. “We needed something to go our way right off the bat, and it did.

Bucknam said it was the first time this season assistant Doug Case, who coaches the sprinters, used that combination on the 400 relay.

Case had been going with different lineups trying to find the right one with James Benson — the Razorbacks’ top sprinter — out with a hamstring injury.

“James getting hurt really changed everything,” Bucknam said. “Doug kept looking for the right combination, and he nailed it.”

Only five teams scored in the 400 relay. Five teams didn’t finish because of dropped batons or exchange zone issues.

“That was carnage out there,” Bucknam said. “It’s so much pressure passing those sticks, and all of a sudden there we were finishing second.

“I’ve never seen anything like that. I don’t know what happened. All I know is we came out of the fire on the last exchange.

“That was a huge momentum changer.”

The 5,000 was another big momentum shift in the meet’s next-to-last event as Arkansas finished 1-2-3 and scored 24 points with freshman Patrick Kiprop winning in 13:41.05 followed by seniors Amon Kemboi and Emmanuel Cheboson.

The Razorbacks clinched at least a tie for the team championship with their performance in the 5,000 that put them ahead 118-108 over Alabama,. Then the Razorbacks made sure to win the title outright by taking seventh in the 1,600 relay with Owens-Delerme, freshman Brandon Battle, sophomore Leroy Russell and junior James Milholen.

Arkansas senior Carter Persyn — who finished fifth in the 3,000-meter steeplechase Friday night — and junior Ryan Murphy — 13th in the 10,000 Thursday night — paced their teammates through the first part of the 5,000 that also featured three Alabama runners.

“We were trying to keep the pressure on Alabama, because we knew it had to be an honest pace,” Bucknam said. “We had some of our guys take the pace out early, and try to get the rust off of our legs, and maybe take something out of Alabama.

“We got together before the race and said, ‘Hey, we’re going to pace it fast. We’re in shape and we were the SEC cross country champs, and we’re going to show them again.’ ”

“Patrick is a talent and he’s a fierce competitor, and I just look at the courage of a freshman going out and taking over that race,” Bucknam said. “That was special. Not many kids can do that.

“That was the nail in the coffin for Alabama.”

“We drop-kicked them,” Bucknam said. “It was perfect.”

Kiprop received the Commissioner’s Trophy as the men’s high scorer with 18 points.

“It was my time to take over and finish it,” Kiprop said on the SEC Network after the 5,000.

Arkansas also got a victory from sophomore Andrew Kibet in the steeplechase; a 2-3-5-6 finish in the 110-meter hurdles from Lemonis, junior Tre’Bien Gilbert, Owens-Delerme and junior Matthew Lewis-Banks; a third-place finish from Kemboi in the 1,500; and second- and fourth-place finishes by juniors Daniel Spejcher and Noah Swaby in the decathlon.

The Razorbacks combined to have 21 athletes score in 12 of the meet’s 21 events.

“It was a true team effort,” Bucknam said. “I’m just really proud about how these guys competed.”

The Razorbacks won their 13th SEC triple crown — titles in cross country, and indoor and outdoor track and field in the same school year — since joining the conference in the fall of 1991 and second in a row.

“We want to do it in honor of Coach [John] McDonnell,” Bucknam said of the legendary Arkansas coach. “It’s in our DNA to try to win all three.”

Alabama was favored to win its first SEC Outdoor championship since 1980. Instead Arkansas, ranked No. 18 nationally behind seven conference peers, won its 21st SEC Outdoor title.

“I think we stunned Alabama, no question,” Bucknam said. “And as a coaching staff, we’re kind of stunned, too.

After the Razorbacks were presented the championship trophy by SEC Commissioner Greg Sankey and called the Hogs, they doused Bucknam with a cooler filled with ice water.

“It actually felt pretty good,” Bucknam said. “It was freaking hot in Mississippi.”

As were the Razorbacks.