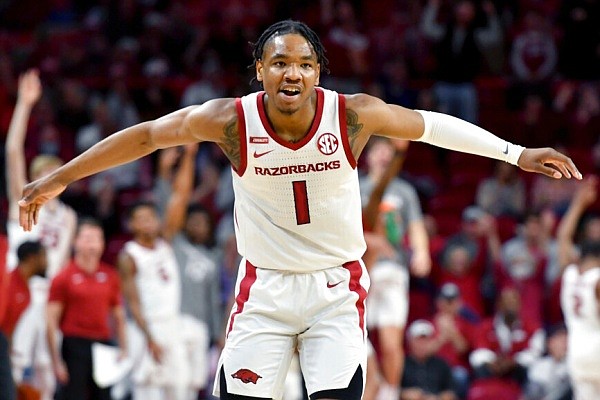 Arkansas guard JD Notae (1) reacts after hitting a 3-point shot against Elon during the first half of an NCAA college basketball game in Fayetteville on Tuesday, Dec. 21, 2021. (AP/Michael Woods)

Arkansas’ All-America guard in 2021-22 struggled in the five-on-five portion of Day 1 at the NBA G League Elite Camp on Monday.

JD Notae, the lone player on the Razorbacks’ roster last season to receive an invitation to the event in Chicago, found limited offensive success in Team 4’s 90-87 loss to Team 3. Notae finished with 4 points, 3 rebounds, 4 assists and 5 turnovers in 17:10 on the floor.

The guard was 1 of 13 from the floor, including 0 of 4 from three-point range. His only score in the scrimmage came on a layup in the final minute to cut Team 4’s deficit to 88-87 with 20.2 seconds remaining.

Following a missed dunk by Texas A&M guard Quenton Jackson on Team 3’s ensuing possession, Team 4 had a chance to tie or take the lead in the closing seconds. But Notae, attacking from the right wing, saw a contested floater from inside the free throw line miss with roughly six seconds to play.

Notae’s team was outscored by 17 points when he was on the floor, according to the final box score.

Games on Day 2 will begin at 3:50 p.m. and will be streamed on the NBA G League YouTube channel. Top performers from the event, which ends Tuesday, will be invited to the NBA Scouting Combine.

Razorbacks forward Jaylin Williams received an invite to the NBA Combine. It began Monday and runs through May 22.