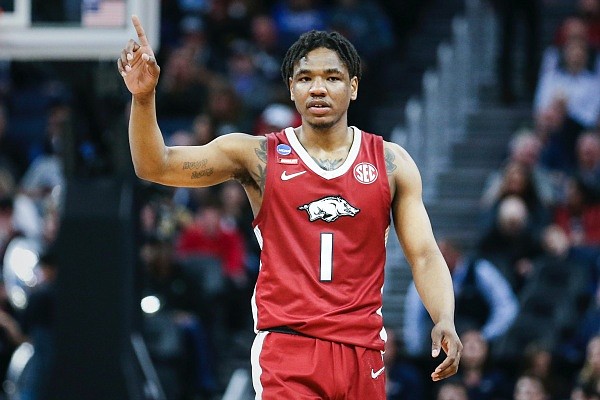 Arkansas guard JD Notae gestures on Thursday, March 24, 2022, during the second half of the Razorbacks' game against Gonzaga in the Sweet 16 of the 2022 NCAA Division I Men's Basketball Championship at Chase Center in San Francisco, Calif.

Notae finished 1 of 13 shooting and had 4 assists against 5 turnovers, but he rebounded in some ways Tuesday and made an impact in Team 4’s 99-94 victory over Team 1 to close the final game of the event. In 19:11 on the floor, Notae scored 7 points on 2 of 7 shooting.

He was 0 of 2 from three-point range, 3 of 4 at the free throw line and added 4 assists, a team-high 2 steals and only 1 turnover. Team 4 was plus-4 with Notae in the lineup.

In an interview following the game, Notae said he felt blessed to be at the camp.

“Just playing with those groups of guys, man, we bonded from the jump,” Notae added. “I feel like I just came here to just try to play my game and have fun.”

Asked if Razorbacks coach Eric Musselman provided any advice to him ahead of the two-day event, Notae said the coach kept his message simple.

“He just told me to come out here and play hard,” Notae said.

Below are testing and measurement figures on Notae from the camp:

Note: Notae was listed at 6-2 on Arkansas’ roster last season.

Note: Of the six point guards who were timed in the shuttle moving both left and right, five clocked a slower time moving right.

Note: Finished with the eighth-best time and third among point guards. Oral Roberts guard Max Abmas was No. 1 at 3.06  seconds.

Note: Tied for the third-best figure. Abmas was No. 1 at 40 inches. According to the Razorbacks’ game notes, Notae’s max vertical at Arkansas was 42 inches.

Note: Finished with the No. 4 overall mark. Texas A&M’s Quenton Jackson was No. 3 at 32 inches, and Jamaree Bouyea of San Francisco was first at 32.5 inches. According to the Razorbacks’ game notes, Notae’s standing vertical was 33 inches at Arkansas.