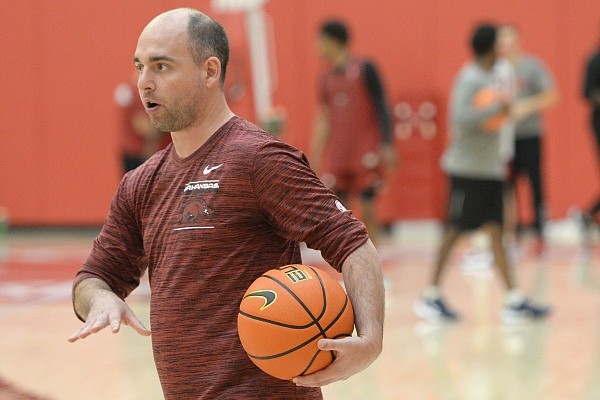 Anthony Ruta leads a drill Tuesday, Sept. 28, 2021, during practice in the university practice facility in Fayetteville. Visit nwaonline.com/210929Daily/ for the photo gallery.

Class of 2023 small forward Kaden Cooper has emerged as one of the hottest prospects this spring, and Arkansas assistant coach Anthony Ruta is in hot pursuit.

ESPN national recruiting director Paul Biancardi mentioned Cooper as one of the standouts of the April 22-24 Adidas event in Spartanburg, S.C.

“His athleticism was high end,” Biancardi said. “He had good strength, excellent lateral quickness and good open-court speed and a vertical bounce that was high level. He uses his athleticism to guard you and he scores with versatility.

Biancardi, who rates Cooper a 4-star prospect, said there’s a good chance Cooper breaks into the top 100 when he updates the rankings in August.

“If he continues to show the two-way ability, the IQ, the toughness, the defense,” Biancardi said. “He contributes to winning. He makes winning plays because he does things other guys don’t do.”

While Cooper doesn’t have a scholarship offer from the Razorbacks, he’s a strong candidate to receive one.

“I feel like if Arkansas offered…Arkansas is a big offer,” Cooper said. “They made it to the Elite Eight this year. They’re an impressive team. They play hard. All the people in the rotation play their role.

"They play like it’s supposed to be played. An offer from them would be great. I don’t know to explain it. It would be surreal.”

Cooper, 6-6, 190 pounds, played at Ada, Okla., for three seasons before playing last season at The Skill Factory in Atlanta. He was teammates with former Arkansas guard Jaxson Robinson at Ada.

Ruta, who has seen Cooper play multiple times for Team Trae Young this spring, has developed a good bond with him.

“He’s more down to earth,” Cooper said. “We have good conversations and I think he likes me a lot. We really have real-life conversations. We talk either [about] how my game went or maybe we’ll talk about an NBA game. I like genuine things.

"Some recruiters like to call you and just ask you about basketball. They might offer right away or whatever, but we have genuine sit-down conversations as if we were at lunch or something.”

Cooper is averaging 13.4 points, 9.1 rebounds, 1.1 assists and 1.3 blocks per game for Team Trae Young. Arkansas Coach Eric Musselman is a fan of his game.

“He loves my aggressiveness, my energy on the ball and of course my offensive transition game,” Cooper said. “They’re a great transition team. They play a lot in the open court. He loves the way I can attack the rim, get a bucket at will, but I think the thing he likes the most is my defense.”

Cooper appreciates how Ruta tells him the good and the bad about his game.

“He’ll go back and watch my game and my clips and tell me like when I’m going too fast on my shot or if I’m coming off the dribble and I maybe don’t hold my form all the way through,” Cooper said. “Just critiques my game and helps me.”

He desires a coach who will help him reach his goals.

“I think a big thing for me from a coach is dedication,” Cooper said. “Like, when I see you’re dedicated to helping me and you will do anything to see me succeed in the highest way possible, then at that point I really mesh with you. The relationship with a coach is a big thing for me.”

While a lot of prospects will shy away from constructive criticism, Cooper embraces it because he sees it as a way to get better.

Cooper has a 3.5 grade point average and is considering studying his love of writing in college.

“They always say do what you love doing. I feel like I love writing,” he said. “I’ll probably pursue it in college.”