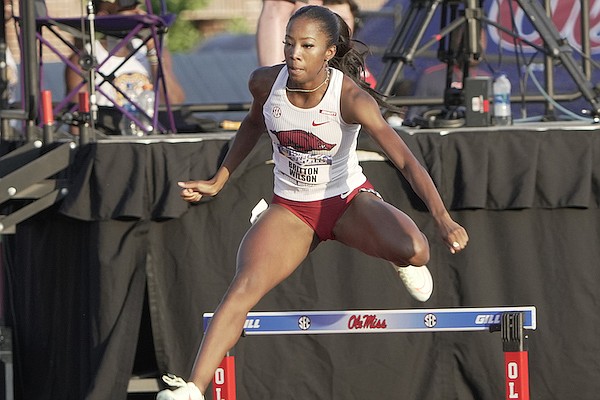 Arkansas' Britton Wilson competes during the SEC Outdoor Track and Field Championships on Saturday, May 14, 2022, in Oxford, Miss.

University of Arkansas sophomore Britton Wilson was named the United States Track and Field and Cross Country Coaches women’s national athlete of the week for her performance at the SEC Outdoor Championships.

Wilson became the first female to win the 400 meters and 400-meter hurdles at the SEC meet and also helped the Razorbacks take third in the 1,600 relay.

Wilson ran school-record times in the 400 (50.05 seconds) and 400 hurdles (53.75) with both times ranking sixth on the all-time collegiate list. Her time of 48.6 anchoring the relay was the fastest relay split ever by a collegiate athlete.

The Razorbacks’ relay — which included Morgan Burks-Magee, Rosey Effiong, and Jada Baylark — ran 3:22.55 to set a school record. The time ranks fourth on the collegiate list.