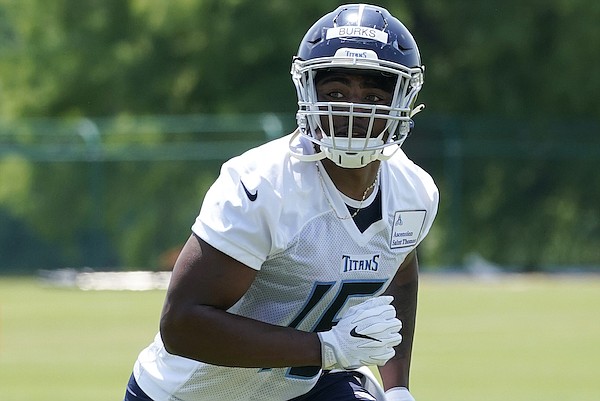 FAYETTEVILLE — Former University of Arkansas standout Treylon Burks has agreed to terms on his NFL rookie contract with the Tennessee Titans.

The Warren native and record-setting receiver for the Razorbacks signed a four-year deal worth a fully guaranteed $14,369,590, according to an ESPN report Tuesday. The report also said the Titans will have the ability to pick up his fifth-year option for 2026.

The Titans selected Burks with their first-round pick, No. 18 overall, after trading star wideout AJ Brown to the Philadelphia Eagles for that spot in the draft.

“Good for him,” Arkansas Coach Sam Pittman said on Little Rock’s KABZ-FM on Tuesday regarding the Burks deal. “My goodness, he might be able to go get him a new dog to hunt with.

“Being drafted in the first round and all those things, coming from the state of Arkansas, playing for the university, that’s really, really special. Sometimes money changes people. I don’t think it’ll change him at all. He might have a better truck or he might have something, but he’ll still be the same wonderful person he was when he was here and down in high school.”

Burks made headlines in Nashville, Tenn., over the weekend after coming off the field during the team’s first workout of a rookie mini camp. According to reports, Burks was breathing heavily and went into the team facility on a cloudless day with the temperature at 85 degrees with a feels-like reading of 90.

Burks returned during 11-on-11 drills but did not complete the workout, according to reports. Burks returned to practice on Saturday and completed that workout, per reports.

Titans Coach Mike Vrabel did not over-react when asked if some players reported out of shape, and he did not criticize Burks.

“I think it’s hard to think that they can recreate with a trainer how we do things,” Vrabel told reporters after Friday’s workout. “We see that with guys that have come back and started with our offseason program and guys that have joined a few weeks in.

“It’s just different. I know that they’re working and they think that they are trying to get in shape, but that’s just not the case. That’s something we have to focus on and try to make sure they’re getting some work in — all of them, and try to be as smart as we possibly can.”