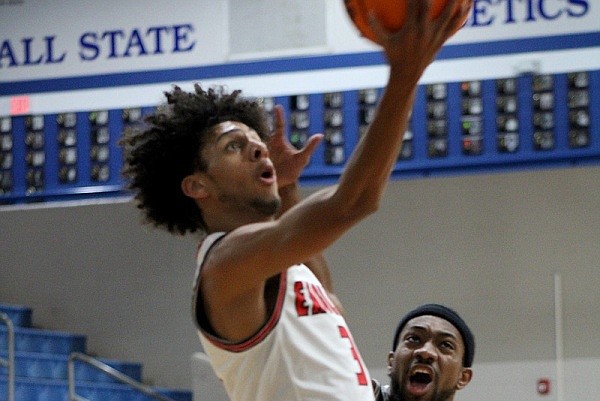 Cutter Morning Star's K.J. McDaniel (3) extends for a layup during Wednesday's loss to Bigelow in the Larry Ray Memorial at Jessieville Sports Arena.

On Wednesdays we feature an in-state prospect who could be flying under the radar of college coaches. This week's UTR prospect is Cutter Morning Star’s KJ McDaniel.

“KJ came to us last year with a tall, skinny frame. I told him when he got here, I said, 'There’s three things you need to do and that’s to develop a tighter handle, let's get in the weight room and let’s work in your jump shot. So we went through the year and he had an phenomenal season.

“To me, what has separated him is after the year and he came in March and sat down and said, 'Coach, I really want to play basketball at the next level.' And I said, ‘Are you sure?' I said, 'Here’s the deal I’m going to make with you. You have to do some things first for yourself.' I gave him a notebook. I said, 'You’re going to keep a journal here. It’s going to be a mirror of your next two months leading up to the end of school. You have to do these things or I’m not picking up the phone calling a college coach. You have to get into the gym. I mean early in the morning and you have to put in the time and you have to buy in to the weight room and you have to start being a leader.' The last two months he’s just been phenomenal and it’s paying off. All the way up to last weekend I think he averaged 25, 8 and 7, something along those lines at a Tulsa Camp. Great kid to be around.

“I think if he’ll continue to do the things he’s doing he may start get a little bit more of that mid-major or low-Division I (interest).”