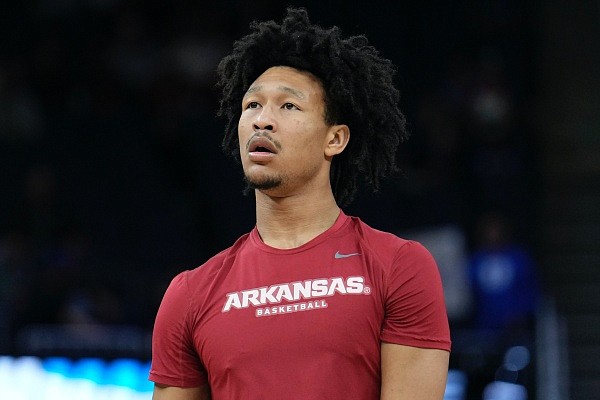 Arkansas forward Jaylin Williams warms up before a college basketball game against Duke in the Elite 8 round of the NCAA men's tournament in San Francisco, Saturday, March 26, 2022. (AP Photo/Tony Avelar)

Below are physical measurements and strength and agility testing numbers for Arkansas forward Jaylin Williams at this week's NBA Scouting Combine in Chicago.

Williams, who is a part of Team Curry for the event's scrimmages, will play his first game at 2:15 p.m on Thursday. Coverage will air on ESPNEWS until 4 p.m., when it will then switch to ESPN2.

Friday's action at the combine will be broadcast by ESPN2 beginning at noon then continue on ESPNEWS at 1 p.m.

Note: Fifth lowest among centers at the event. Moussa Diabate, a center from Michigan, had the lowest body fat percentage of all participants at 2.7%.

Note: Tied for the shortest among 10 centers measured as of Wednesday night. Diabate and Auburn’s Walker Kessler measured the same as Williams. Only one power forward had a smaller measurement.

Note: Tied with Diabate for second widest among centers. Christian Koloko of Arizona measured at 10.75 inches, and LSU’s Tari Eason, who is listed as a power forward, came in at 11 inches.

Note: Williams was listed at 6-10 on Arkansas’ roster last season.

Note: Williams measured three inches greater than his listed height. His wingspan was listed at 7-1 1/2 in the Razorbacks’ game notes.

Note: Posted the No. 5 time among eight centers tested as of Wednesday night and 12th fastest out of 15 power forwards/centers.

Note: The time ranked next to last among 50 participants tested. Gonzaga forward Drew Timme clocked a time of 3.38 seconds, and Michael Foster Jr. (G League Ignite) was No. 1 among centers at 3.22 seconds.

Note: According to the Razorbacks’ game notes, Williams’ max vertical was 35 inches. The figure tied for fourth lowest among 51 participants tested.

Note: According to the Razorbacks’ game notes, Williams’ standing vertical was 26 inches. The mark tied for third lowest among 51 participants tested.