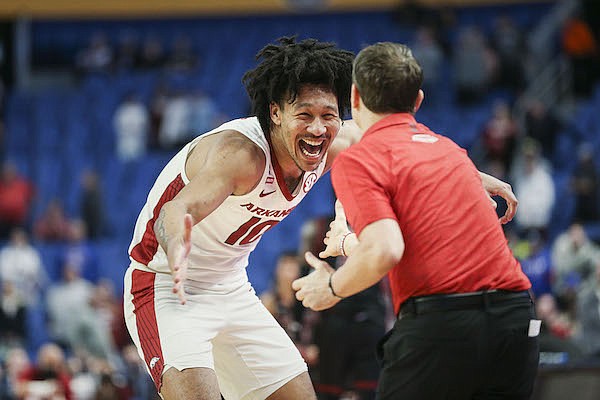 Arkansas forward Jaylin Williams (10) celebrates with coach Eric Musselman near the end of the Razorbacks' 53-48 win over New Mexico State on Saturday, March 19, 2022, at the NCAA Tournament in Buffalo, N.Y.

BENTONVILLE — Several websites have University of Arkansas forward Jaylin Williams being chosen midway through the second round of the NBA Draft.

The 6-10 Williams, an All-SEC pick by the media and coaches and eligible to return to Arkansas for his junior season, has the opportunity to raise his draft stock this week at the NBA Scouting Combine in Chicago.

Williams is among more than 75 players expected to take part in the combine.

Players are divided into teams that will begin scrimmaging each other today at Wintrust Arena in front of scouts, coaches and front-office personnel from all 30 NBA teams.

“We’ll watch Jaylin’s games and hope that he does great,” Arkansas Coach Eric Musselman said Wednesday after speaking about teamwork at a Walton Family Foundation event. “I know he’s really worked hard and been really focused on the NBA stuff, and we’re just hoping he kicks butt. Hope he does well.”

The better Williams does at the combine, the higher the odds figure to be of him staying in the draft.

Musselman said that doesn’t affect how much he and the coaching staff want to see Williams maximize his opportunity in Chicago.

“Look, it’s a dream of Jaylin’s — and all the guys — to play in the NBA,” Musselman said. “He’s positioned himself to play in the combine, which is the top level of competition you can be a part of. That’s the draft class right there.”

Musselman was asked if he believes Williams, a former Fort Smith Northside standout, is leaning toward staying in the draft or returning to Arkansas.

“I think he’s been really focused on trying to make the NBA,” said Musselman, a former NBA head coach with Golden State and Sacramento. “I don’t think there’s anything other than that on his mind. Which is how his mental focus should be.

“If you declare for the draft, you should be all in and do everything you can to try to position yourself to get drafted as high as you can.”

Williams will play for Team Curry at the combine. His teammates include some SEC rivals with Vanderbilt’s Scotty Pippen Jr., Alabama’s Keon Ellis and Mississippi State’s Iverson Molinar. Julian Strawther, who played for NCAA Tournament No. 1 overall seed Gonzaga — which the Razorbacks beat 74-68 in the West Regional semifinals in San Francisco — also is a Curry teammate.

Williams’ numbers on Wednesday when players at the combine underwent measurements included having a 7-1 wingspan, body fat of 8%, a maximum vertical jump of 30 inches and standing vertical jump of 24 1/2, weighing 236.6 pounds and being 6-10 wearing shoes.

In SEC play, Williams averaged 13.6 points and 10.2 rebounds. He had 16 double-doubles on the season, including in all four NCAA Tournament games. He set career-highs with 22 points at Alabama and 16 rebounds against Tennessee.