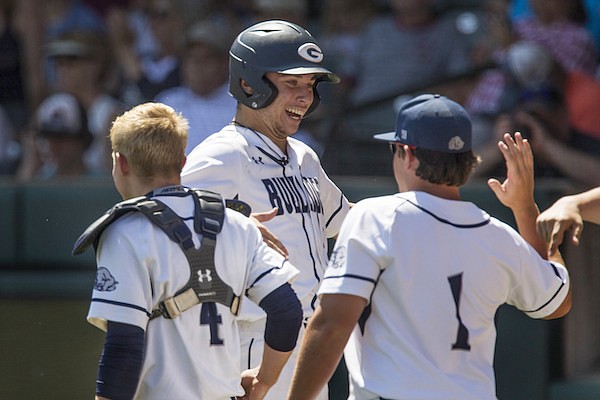 Greenwood's Peyton Holt (center) reacts after scoring a run during the first inning of the Class 6A baseball state championship game on Saturday, May 19, 2018, in Fayetteville.

"Obviously I’ve always wanted to be a Hog growing up," Holt said. "I felt like it was a good fit for both of us. The expectations and standards of the program and the desire to win a national championship is exactly what I’m looking for in a program.

"I feel like we are a great fit for each other. I like the coaching staff and I know guys that have came through that program and loved it. It’s the best college baseball atmosphere in the country and I’m pumped to get down there and be apart of it."

He has a fielding percentage of .944 and has committed nine errors for the Roughriders. Crowder (50-10) is ranked No. 5 in the NJCAA rankings.

“He can play any position on the field but first or pitcher,” Brewster said. “I know a couple of pro guys have turned him in as a catcher. He’s played the outfield for Crowder. In the Junior College World Series last year, he played left field. He’s played second base and shortstop for them this year.”

Holt, 5-10, 205 pounds, was also an outstanding football player at Greenwood. He helped the Bulldogs to the Class 6A state title at quarterback with a 45-14 rout of Benton as a senior in 2018.

Brewster expects Holt to play infield for the Razorbacks, but that could change.