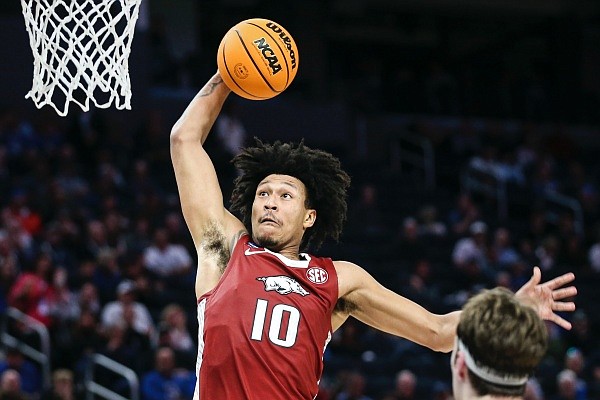 Arkansas forward Jaylin Williams dunks on Thursday, March 24, 2022, during the first half of the Sweet 16 round of the 2022 NCAA Division 1 Men's Basketball Championship at Chase Center in San Francisco, Calif. Check out nwaonline.com/220325Daily/ and nwadg.com/photos for the photo gallery.

Arkansas forward Jaylin Williams did a little bit of everything Thursday in his first scrimmage at the NBA Scouting Combine in Chicago.

And his squad, Team Curry, earned a 100-81 win over Team Weaver. Coming off the bench, Williams finished the game with 5 points, 6 rebounds, 3 assists, 1 block and 1 steal.

“Really like Jaylin Williams,” ESPN analyst Cory Alexander said during the first half on the television broadcast. “He’s very versatile, a huge key to Arkansas’ success over the past couple of seasons under Coach (Eric) Musselman. He’s really having a good showing here today.”

Williams was 2 of 6 from the floor, including 1 of 4 from three point range. Team Curry outscored Team Weaver by 15 points in his 20:58 on the floor.

Williams’ first score of the afternoon came on a top-of-the-key three-pointer. His final field goal was a dunk in pick-and-roll action with Mississippi State guard Iverson Molinar.

His day was complete with a drawn charge with 1.1 seconds remaining in the first half.

Williams took 54 charges in his sophomore season with the Razorbacks.

“His versatility, he can step out and make threes. At the college level, he was solid,” ESPN analyst Dalen Cuff said. “The NBA level, the (extra) foot and a half changes things a little bit. He passes it well. We saw him throw a great dime in the first half, he’s got good vision.

“We know he takes all those charges, plays at a really high level. High-motor guy.”

Team Curry coach Edniesha Curry, who is an assistant with the NBA's Portland Trail Blazers, said during the broadcast that Williams was among four players from her group who had impressed her with basketball IQ.