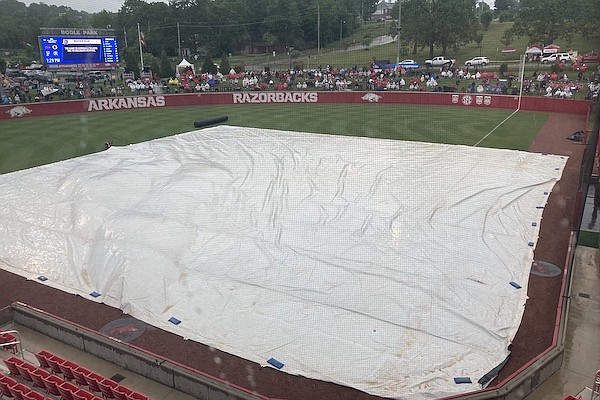 A tarp sits on the field at Bogle Park as an NCAA Tournament game between Arkansas and Oregon is delayed Saturday, May 21, 2022, in Fayetteville.

FAYETTEVILLE — The NCAA Softball Tournament game between Arkansas and Oregon is scheduled to resume at 3:53 p.m.

Arkansas was batting in the bottom of the first inning at the time the game was delayed. The Razorbacks had two runners on base with two outs after Taylor Ellsworth walked and Danielle Gibson was hit by a pitch in consecutive at-bats.

Neither team had scored. The Ducks were retired in order in the top of the first inning.

Arkansas and Oregon are playing in the winner’s bracket of the NCAA Fayetteville Regional. Their game is the first of three games scheduled at Bogle Park on Saturday.

According to the National Weather Service, showers and thunderstorms are possible in Fayetteville into Saturday night.