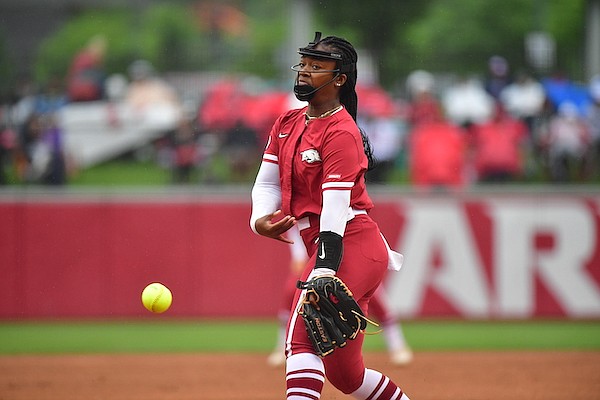 Arkansas' Chenise Delce pitches during an NCAA Tournament game against Oregon on Saturday, May 21, 2022, in Fayetteville.

FAYETTEVILLE — Chenise Delce had just one thing on her mind Saturday. She wanted to dance.

The University of Arkansas junior right-handed pitcher had just completed one inning in the circle when storms moved through and forced the Razorbacks and Oregon players off the Bogle Park field during Saturday’s game in the NCAA Fayetteville Softball Regional.

Over the next two-plus hours as a steady rain fell, Delce said she recalled a similar delay last year at the Women’s College World Series.

Whatever it was that kept Delce focus, it worked well. The SEC Pitcher of the Year came back from the long delay and held Oregon’s bats at bay in a 6-2 win that moved the Razorbacks into today’s regional championship game.

Delce (18-2) scattered six hits and struck out nine in the complete-game win. She held Oregon scoreless until the seventh inning when she gave up a two-run home run that skipped off the top of the wall. Arkansas (46-9) was up 6-0 at the time, thanks to a six-run sixth inning that ended a pitcher’s battle between Delce and Oregon right-hander Makenna Kliethermes.

Delce said the Razorbacks were able to stay loose in the team’s clubhouse during the weather delay by watching other softball games being played Saturday.

“I kind of joke about it with Coach [Courtney] Deifel that I have nothing going on in my head,” Delce said. “So I rely on other people to keep me in the game, I guess. But knowing that our team is really good, our batters are really good, it was only a matter of time.”

It took Arkansas six innings to finally break through against Kliethermes. The Oregon pitcher held the Razorbacks hitless for three innings and off the scoreboard for five innings. But the sixth inning was the breakthrough Arkansas was looking for.

Danielle Gibson, who was 2 for 3, led off the sixth inning with a single and Hannah Gammill followed with a single. In a similar situation in the fourth inning, Arkansas failed to produce any runs. Given another opportunity, the Razorbacks delivered.

Linnie Malkin, who flied out to shallow right in the fourth, was ready to swing after getting a pep talk from Arkansas assistant coach Yolanda McRae in the dugout. Malkin crushed the first pitch she saw from Kliethermes high into the overcast sky into deep center for a three-run home run, her team-leading 21st homer of the season. That opened the floodgates as Kacie Hoffmann followed with a solo blast to right, and Hannah McEwen added a two-run double to put the Razorbacks up 6-0.

“I was just looking for redemption,” Malkin said of her home run swing. “In the dugout, Coach Yo gave us a good hype speech and we were going to do it for Chenise who was pitching her butt off. I just tried to stay composed.”

The six-run sixth was more than enough for Delce, who got a strikeout and groundout to end the game.

Deifel did not downplay the importance of Saturday’s win and moving into today’s championship game, where the No. 4 national seed Razorbacks would have to lose twice in order to be eliminated from the NCAA Tournament.

“It was a big one to win. This is the big one that sets you up for [today],” Deifel said. “And we’ll be ready for whoever that is.”