Off and running: Razorbacks run-rule Princeton to start NCAA regional 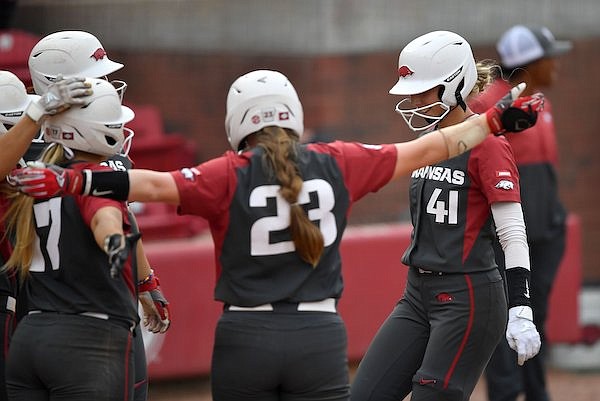 Arkansas first baseman Danielle Gibson (41) is congratulated at the plate Friday, May 20, 2022, after hitting a grand slam during the fourth inning of the Razorbacks' 11-0 run-rule-shortened win over Princeton at Bogle Park in Fayetteville.

FAYETTEVILLE — Danielle Gibson walked up to the plate and into a scenario she could not have drawn up more perfectly.

The University of Arkansas senior looked out over the softball diamond and saw the bases filled with teammates and a pitcher struggling to find the strike zone.

Gibson made the most of the opportunity. The first baseman hammered a grand slam to straightaway center field, a blast that sealed Arkansas’ 11-0 five-inning run-rule win against Princeton in the opening game of the NCAA Fayetteville Regional in front of a packed Bogle Park crowd Friday evening.

“I think at that moment I was looking to hit the ball hard,” said Gibson, who had 5 RBI. “The pitcher they brought in was trying to put something over the plate. She hadn’t thrown a lot of strikes, so I was trying to be selective. It went out, so I was happy. It was a huge momentum shift.”

For the first three innings, it appeared the SEC champion Razorbacks would have to manufacture runs as Tigers’ starter Alexis Laudenslager (11-8) held the prolific Arkansas offense in check with just three hits.

Prior to Gibson’s blast, Arkansas did just that as senior center fielder and SEC Player of the Year KB Sides ignited the Razorbacks’ offense with her speed, helping the home team to a 3-0 lead. Sides opened the bottom of the first inning with a walk and scored from first base on a fielder’s choice when her speed caused the Princeton first baseman to hurry a throw to third. The throw went into the left-field foul area and Sides scored easily for the first run.

Sides was in the middle of another scoring play in the third when she led off with a single up the middle. Hannah McEwen followed with a ground ball to second, but Sides raced to the bag and McEwen made it safely to first on the play. Both would eventually score with Sides scoring on Taylor Ellsworth’s ringing double off the base of the wall in center.

“She’s a difference-maker,” said Arkansas Coach Courtney Deifel of Sides. “She’s done a tremendous job all year of setting the table. She’s been a huge tone-setter for us. She very rarely has bad at-bats and she very rarely stretches her [strike] zone. She just collects so much information in that lead-off spot.”

The 3-0 cushion turned into an 11-0 landslide in the fourth inning as Arkansas scored eight runs and batted around against three Princeton pitchers. Laudenslager lasted just one out in the fourth before control issues allowed the Razorbacks to fill the bases. Molly Chambers replaced Laudenslager and walked the first batter she faced on four pitches.

That brought up Gibson and the 4-0 Arkansas lead swelled to 8-0 on one swing of the bat. The Razorbacks tacked on three more runs before Ali Blanchard came on for Chambers and got Ellsworth to fly out to deep center.

The early runs were more than enough for Arkansas starter Mary Haff (19-4), who allowed just two hits and struck out six to earn the victory. Haff was never in trouble, walking just one batter.

Princeton Coach Lisa Van Ackeren, whose team played just a handful of games in 2020 and 2021, said the environment on Friday at Bogle Park with the outfield berm area packed with fans was an incredible sight for her team.

“What an awesome experience,” Van Ackeren said. “This was an incredible experience for our kids. Just a great opportunity for these guys who have been through a lot. Just an amazing environment to play in front of today. You didn’t get the best of Princeton softball, but we’re here to compete all weekend, so we’re looking forward to the rest of the tournament.”