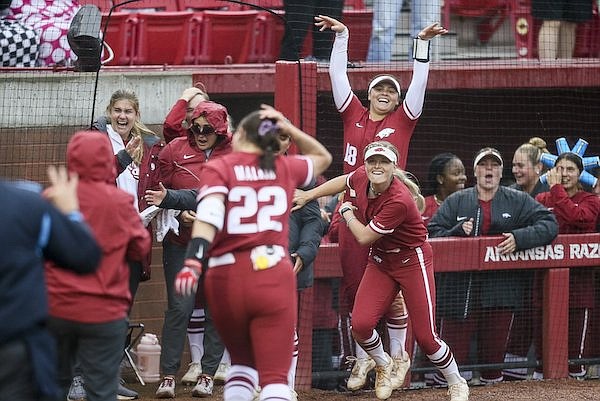 Arkansas players celebrate three runs during the sixth inning of an NCAA Tournament game against Oregon on Saturday, May 21, 2022, in Fayetteville.

FAYETTEVILLE — University of Arkansas softball Coach Courtney Deifel wasn’t sure which team was in better position when Saturday’s game with Oregon reached the later stages of the Razorbacks’ 6-2 victory.

The No. 4 national seed Razorbacks and Oregon were scoreless when the NCAA Fayetteville Regional game entered the bottom of the sixth inning at Bogle Park.

Her question was answered in the bottom of the sixth inning.

The Razorbacks had only one hit to that point, a fourth-inning Danielle Gibson double. Leading off the sixth, the redshirt senior belted her second hit of the afternoon, slapping a single up the middle.

Sophomore Hannah Gammill followed suit with a base hit to center field, setting up a two on, no outs situation for Linnie Malkin, Arkansas’ all-time home run leader.

Facing a 2-2 count, the redshirt senior from Broomfield, Colo., crushed a three-run home run, nearly hitting the scoreboard past the center field wall. It was her 21st home run this season, breaking the tie and putting the Hogs ahead 3-0.

“I was looking for a hit,” Malkin said. “Just staying focused and staying the course, just not really thinking in the box. I think it’s the best way to stay focused, just let the game come back to me. It felt good.”

The Razorbacks’ scoring frenzy had only begun. In the next at-bat, freshman Kacie Hoffmann crushed a solo homer onto the grass berm in right field. Hannah McEwen added two more runs later in the inning when she doubled to left center, scoring KB Sides and Audrie LaValley.

“We clustered our hits together, which was huge,” Deifel said. “Danielle Gibson had a really good at-bat in the sixth, and then Hannah Gammill, then obviously with Linnie. … It’s just passing the bat and finding a way, so it’s just really nice that we worked them together.”

The Razorbacks scored six runs in the inning off five hits, shifting all momentum in their favor. Both Deifel and Malkin credited assistant coach Yolanda McRae for lighting a fire in the team.

“We just weren’t in our approach that we typically are,” Deifel said of the team’s at-bats prior to the sixth. “And I don’t know exactly why, but that sixth inning obviously we just kind of had that focus. Like she [Malkin] said, Coach Yo gave them a really good talk in the dugout just to encourage them and just challenge them to grab the momentum.”

Deifel said she always trusts her team to come through in big situations.

“I always feel like our team can do it,” she said. “More often than not, my money’s going to be on our team.”

While Gammill was at-bat during the sixth inning, a roar of squeals and laughter broke out inside Bogle Park between pitches.

A squirrel had made its way onto the field, scurrying behind the plate and running up into the stands. It caused a pause in the game’s action, as both dugouts turned to see what the commotion was about.

The critter may have been the luck needed for Arkansas. After the squirrel made its appearance, the Razorbacks strung together three straight hits, including Linnie Malkin’s three-run blast to bust open what had been a scoreless game.

“That was our hype squirrel,” Malkin said. “It was planned, for sure.”

Despite a light drizzle coming down prior to first pitch, the teams began play at 1:03 p.m. It took only 21 minutes for Mother Nature to put a halt in the action.

Lightning in Bogle Park’s vicinity caused officials to place the game in a weather delay, a pause that lasted 2 1/2 hours. Play finally resumed at 3:54 p.m.

Arkansas Coach Courtney Deifel said she didn’t have to do much to keep her squad focused during that stretch.

“Quite honestly, they just take care of each other,” she said. “We went and we watched softball, we hung out and we had no idea how long it was going to be. But I don’t need to motivate this team. That’s what’s really nice. They’re competitors, so they’re ready to go when it’s time. It doesn’t matter how long we’ve been sitting, they’re ready to roll. They just don’t really flinch in any circumstance.”

When Arkansas Coach Courtney Deifel was a graduate assistant at the University of Oklahoma from 2008-09, Oregon Coach Melyssa Lombardi was an assistant coach for the Sooners. Lombardi held the position for 21 years before receiving the head coaching job at Oregon.

The two years spent with Deifel began a long-lasting friendship.

“I just love Missy,” Deifel said. “She’s a great friend of mine, a mentor to me. She was on staff at Oklahoma while I was a grad assistant, and we’ve continued a friendship since then. I just have a ton of respect for how she does things, who she is, and I’m just really fortunate that I get to call her a friend.”

During the first inning of Arkansas’ 11-0 win over Princeton on Friday, catcher Taylor Ellsworth was drafted by the USSSA Pride, a professional softball team in the newly formed Women’s Pro Fastpitch League.

She was selected with the 10th overall pick, becoming the second Razorback drafted professionally this month. She joins Gibson, who was drafted in the Athletes Unlimited Draft on May 4.

Ellsworth, a graduate transfer from the University of Texas, has been an integral part of Arkansas’ success in 2022. She has started every game this season, recording 55 hits to go along with 53 RBI, 14 home runs and a .346 batting average. Her presence behind the plate on defense has been felt, as Arkansas allowed the third-fewest wild pitches in the SEC (23).