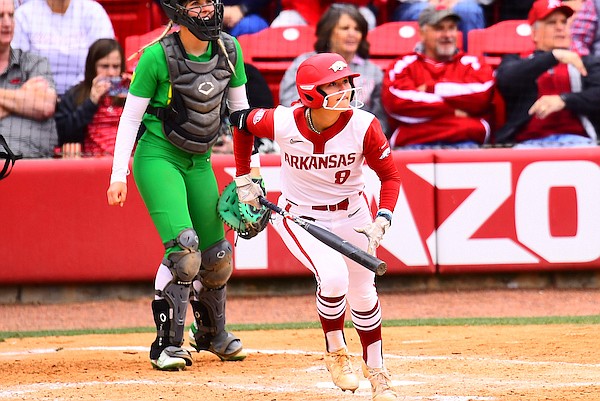 Arkansas' KB Sides hits a home run during the sixth inning of an NCAA Tournament game against Oregon on Sunday, May 22, 2022, in Fayetteville.

FAYETTEVILLE — Arkansas broke a tie with six runs in the sixth inning, and the Razorbacks defeated Oregon 9-3 on Sunday to win the Fayetteville Regional of the NCAA Softball Tournament at Bogle Park.

Pinch hitter Rylin Hedgecock hit a three-run double and KB Sides followed with a two-run home run in consecutive two-out at-bats in the sixth. Pinch runner Cally Kildow scored on a one-out wild pitch by Makenna Kliethermes earlier in the inning to give Arkansas a 4-3 lead.

It was the second consecutive day the Razorbacks broke a tie with a six-run sixth inning against the Ducks. Arkansas scored all of its runs in the sixth inning of a 6-2 victory over Oregon on Saturday.

The Razorbacks (47-9) advanced to a home super regional that will begin Thursday or Friday at Bogle Park. They will host the winner of the Seattle Regional championship between Washington and Texas.

Oregon, which won an elimination game against Wichita State after midnight Sunday morning, had its season end with a 33-19 record.

Taylor Ellsworth singled, Danielle Gibson reached on a fielder’s choice and Hannah Gammill walked to load the bases for Arkansas with no outs in the sixth.

Linnie Malkin, who broke a scoreless tie with a three-run home run against Kliethermes on Saturday, was called out looking at a 1-2 pitch that appeared to be outside the strike zone. That brought Kacie Hoffman to the plate. Kliethermes threw away the first pitch, which scored Kildow, who pinch ran for Ellsworth.

Hoffman was intentionally walked to load the bases again. After Audrie LaValley lined out the shortstop, Hedgecock doubled to center field on a 3-2 pitch. The ball went off the glove of Oregon center fielder Jasmine Williams, who was retreating toward the outfield wall.

"I just tried to stay relaxed and just not make the situation bigger than what it is," Hedgecock said. "I just kind of think of it as another bat and just stay relaxed."

Arkansas hit three solo home runs to take a 3-0 lead. Malkin and Hoffman hit back-to-back two-out home runs in the second inning, and Gibson led off the fourth with a solo homer.

The Razorbacks hit four home runs Sunday and seven during the regional. Arkansas has hit a school-record 109 home runs this season.

"We were just trying to hit the ball hard," Gibson said. "We've got a lot of power up and down the lineup...so much power, so much depth.

"It's a facet of our game, but I think that we're a lot more than the long ball, which is really cool to say."

Oregon, the designated home team, tied the game 3-3 in the bottom of the fourth inning. The Ducks had three consecutive base runners against Mary Haff to start the inning, and all three scored on the same play.

Ariel Carlson’s double scored Han Delgado, and Allee Bunker and Carlson scored on throwing errors by Hannah McEwen and Hoffman, who tried to throw out an advancing base runner. Only one run was earned.

Deifel told her assistant coaches she didn't like the vibe of the game during the inning. Assistant Matt Meuchel spoke to the players between innings.

"Coach Meuchel pulled us in right after that inning was over and just kind of said it like it was," Gibson said. "It was an unfortunate play and we've kept control of the game thus far, and let's keep controlling the game. I think it took us just a little bit to kind of bring back our emotions and bring back our focus

"You know, things that happen like that are just prepping us for what's to come, and in the future it's going to be hard ball games coming up here pretty soon. But the ability for us to be able to kind of just flip a switch and continue to perform really well, I love to see that from us."

Oregon's fourth-inning runs were the only runs scored in seven innings against Haff, who won her team-best 20th game. Haff allowed 6 hits, walked 1 and struck out 4 during her 111-pitch outing. She also pitched all of Arkansas’ 11-0 victory over Princeton in five innings Friday.

Bunker and Carlson had back-to-back singles against Haff to lead off the bottom of the sixth, but they were stranded on the corners when pinch hitter Gab Herrera popped up to shortstop. Haff retired all three hitters she faced in the seventh to finish her eighth complete game.

"I'm really proud that Mary was very, very good today," Deifel said, "just staying the course when we uncharacteristically gave some runs away. It's just not what we do."

The Razorbacks swept their regional with three victories by a combined score of 26-5. They have won 16 of their last 17 games.

Arkansas is in a super regional for the third time since 2018. The Razorbacks were swept in a home super regional against Arizona last season and are looking to advance to the Women’s College World Series for the first time.