Arkansas vs. Oregon at the NCAA Softball Tournament: How to watch, forecast, team comparisons 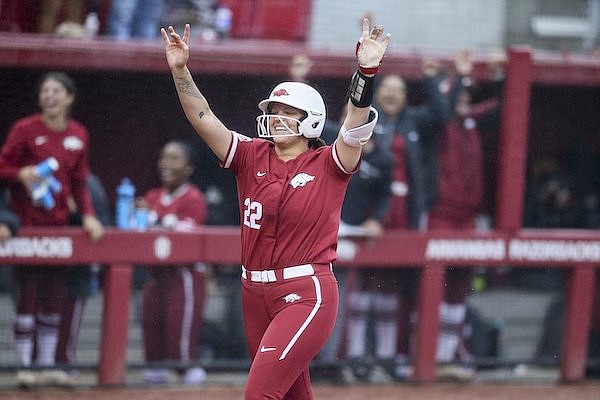 Arkansas' Linnie Malkin celebrates a home run during an NCAA Tournament game against Oregon on Saturday, May 21, 2022, in Fayetteville.

TELEVISION The game will be televised by SEC Network and can be accessed on WatchESPN.com and via the ESPN app (carrier login required).

FORECAST According to the National Weather Service, Sunday will be partly sunny with a high of 67 degrees in Fayetteville.

NOTABLE Arkansas and Oregon could play as many as two games Sunday. If the Razorbacks beat the Ducks once, they will advance to the super regional round next week. Oregon must win twice Sunday to advance to the super regionals....Following its 6-2 loss to Arkansas earlier in the day, Oregon defeated Wichita State 8-1 in an elimination game Saturday night. The game did not end until 12:40 a.m. Sunday....Arkansas coach Courtney Deifel and Oregon coach Melyssa Lombardi were on staff together at Oklahoma for two seasons from 2008-09. Deifel was a graduate assistant coach for the Sooners and Lombardi was a 21-year assistant at Oklahoma....The Ducks eliminated the Razorbacks from the NCAA Tournament with a 3-0 victory in Norman, Okla., in 2008....The Razorbacks are 26-4 at home this season....Arkansas is hosting an NCAA regional for the third time in program history. The Razorbacks won their previous home regionals in 2018 and 2021....Arkansas is the No. 4 overall seed in the NCAA Tournament and will host a super regional next week if it wins its regional....The winner of the Fayetteville Regional will be paired with the winner of the Seattle Regional in the super regional round. The Seattle Regional includes Washington, Texas, Weber State and Lehigh.