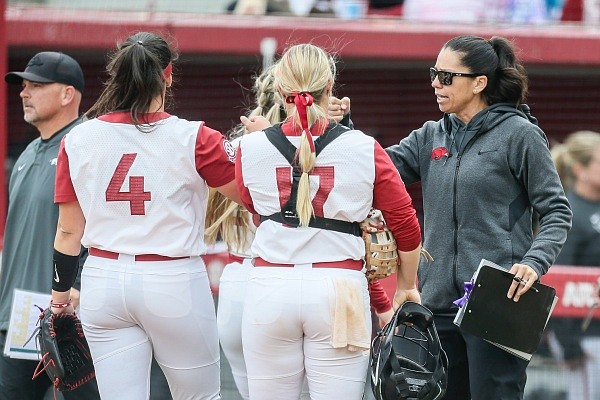 Arkansas coach Courtney Deifel high-fives players, Sunday, May 22, 2022 during the fourth inning of the championship game of the Fayetteville Regional Softball Tournament at Bogle Park in Fayetteville. Check out nwaonline.com/220523Daily/ and nwadg.com/photos for the photo gallery.

The Razorbacks, who defeated Princeton on Friday and Oregon on Saturday and Sunday to win the NCAA Fayetteville Regional, will host Texas at Bogle Park this week in a best-of-three-game series.

Game 1 is set for Thursday at 6 p.m. on ESPN2, and Game 2 is scheduled for Friday at 3 p.m. on ESPN. The series winner will advance to the Women’s College World Series in Oklahoma City.

Texas advanced to the Fayetteville Super Regional from the Seattle Regional, where the Longhorns defeated Weber State 6-0 on Friday and host No. 11 Washington 8-2 on Saturday to move to the championship round. Texas fell 2-1 to the Huskies on Sunday afternoon then rebounded for a 3-2 victory over Washington on Sunday night.

“They’re an incredibly talented offense,” Texas pitcher Hailey Dolcini said of Arkansas on the ESPNU broadcast Sunday. “We’ll get to do some scouting this week and get rested up and attack. I’m super excited to get out there.”

Texas is 6-0 all-time against the Razorbacks, but the programs last met in 2016 during Courtney Deifel’s first season at Arkansas. The Longhorns defeated Razorbacks 4-1 and 6-5 in 8 innings at the Texas Classic in Austin, Texas.

Arkansas, the No. 4 national seed, is 27-4 at home this season. The Razorbacks have won eight consecutive games and 15 of their last 16 at Bogle Park.

The Razorbacks were eliminated in their first home super regional last year by Arizona.

Arkansas starting catcher Taylor Ellsworth transferred from Texas, where she played in 171 games and started 162. Ellsworth is hitting .344 this season with 14 home runs and 53 RBI in 56 games.