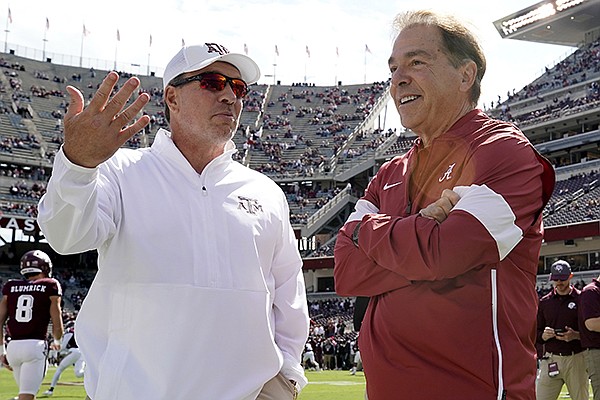 It won’t happen in the Atlantic Coast Conference.

Probably not in the Big Ten.

The Big 12 is too fragile and the Pac-12 is too academic.

The SEC, though, will air its dirty laundry, boldly knowing it will be forgotten next time it wins a national championship in football.

In the SEC, football is Saturday’s religion and the king of swing, Nick Saban, has had the unfathomable trick played on him.

He and his Alabama Crimson Tide did not finish No. 1 in recruiting.

Neither did Georgia, LSU nor Florida, the only acceptable programs to best the Tide when it comes to attracting incoming freshmen. Do we dare still call them student-athletes?

Last week, Saban — who has won six national championships, five at Alabama — went off on a guy named Jimbo who coaches a school in College Station, Texas.

Lost on Saban, or maybe his head is too big to wrap around it, was Bear Bryant coached at Texas A&M.

The legendary Crimson Tide coach, who was a Fordyce Redbug before matriculating at Alabama, once coached the Aggies and books were written about his tenure.

Granted, A&M is known for good football, great engineering degrees and living in the shadow of the University of Texas.

How could such a school in such a place out-recruit Alabama?

The word is A&M collectives paid $30 million for a recruiting class that is so loaded the Houston Texans won’t make the 90-minute bus ride to scrimmage the Aggies.

Here’s what puts the curd in the buttermilk: The NCAA has now declared the Name Image Likeness doesn’t mean schools can’t pay for play when it comes to recruiting.

This happened recently as the once powerhouse of college athletics tries desperately to get a foothold on its muscle that is fading like a 72-year-old heart patient.

The key word is collectives, which primarily is a group of boosters who want to whoop and holler wins, which the NCAA says is still a rules violation.

Honestly, this NIL thing is so convoluted even the Supreme Court, who from their superior seats decided players should be paid, could not fix it.

In fact, those superiors aren’t being heard from about the problem they created.

Of course, players deserve compensation for the multi-millions they are making for Power 5 schools.

Yet, the Supremes just handed down a blanket decision without rules, ramifications or common sense.

Texas A&M might be walking a fine line, but according to the Supreme Court of the United States of America the Aggies did what they apparently should have been doing since the times when they were alleged to be doing it and found guilty by the NCAA.

In an attempt to be crystal clear, in my 44 years of covering college athletics — first the wild Southwest Conference and the past 30 years the SEC — the three most arrogant programs in the country are Alabama, Texas and Ohio State.

Sir Saban, in his role of emperor of all things crimson, is having severe digestion problem when it comes to one of his proteges outrecruiting him.

Saban has been a master when it came to getting the best talent in the country regardless of where he lives.

He has been able to pick and choose.

Now a school not just in his conference but in his division has bested him.

Fisher counter-punched the next day, calling his former boss a narcissist.

The exchange caused SEC Commissioner Greg Sankey to put out a statement that basically said the SEC coaches should not air their dirty laundry in public.

Truthfully, the rest of the world of perspiring arts delighted in the SEC not hoisting another trophy.