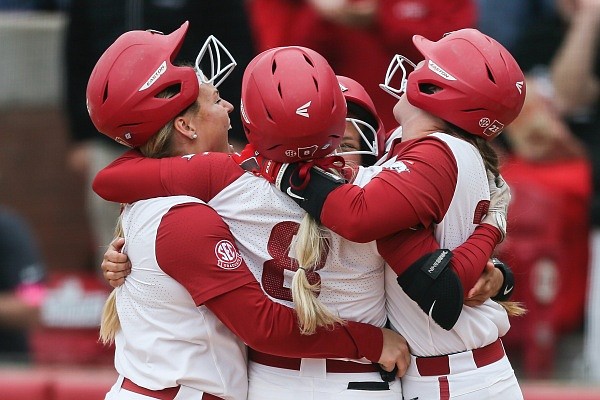 Arkansas players hug after a score, Sunday, May 22, 2022 during the sixth inning of the championship game of the Fayetteville Regional Softball Tournament at Bogle Park in Fayetteville. Check out nwaonline.com/220523Daily/ and nwadg.com/photos for the photo gallery.

FAYETTEVILLE — For the second day in a row, Arkansas entered the sixth inning tied with Oregon. And for a second consecutive day, the Razorbacks took command by scoring six runs in the inning.

The difference between Sunday’s explosion in the inning was it came on the heels of adversity.

After jumping ahead to a 3-0 lead, the Razorbacks surrendered three runs during one play in the fourth inning. With runners on first and second, Oregon’s Ariel Carlson doubled to left field, and two Razorback throwing errors led to everyone scoring.

Despite the sudden change of momentum, the Arkansas dugout stayed composed.

“It’s very veteran,” redshirt senior Danielle Gibson said. “I think that you see and you hear our coaches talk about being poised. And I think that throughout the year, we’ve just really showed what it means to be really poised. It’s kinda funny ‘cause we don’t really blink when that kind of stuff that doesn’t go our way. We just are like, ‘OK, the game’s gonna come back to us.’ ”

The game came back to the Razorbacks.

Leading off the sixth, graduate transfer Taylor Ellsworth singled through the right side. In the next at-bat, Gibson hit a fielder’s choice, but both her and Ellsworth were safe thanks to an Oregon error. Hannah Gammill drew a walk to load the bases, and two at-bats later, a wild pitch allowed pinch-runner Cally Kildow to come home, giving Arkansas a 4-3 lead.

Later in the inning, Deifel elected to place Rylin Hedgecock in the game as a pinch hitter. The redshirt sophomore from Valdosta, Ga., delivered. On a full count, Hedgecock drove a three-run double off the outstretched glove of Oregon center fielder Jasmine Williams.

KB Sides, the SEC Player of the Year, put an exclamation mark on the inning. She parked a two-run home run over the center field wall, capping an onslaught of Razorback runs in the inning and giving Arkansas a 9-3 advantage.

Like Saturday, Deifel gave credit to a staff member for helping refocus the team. Assistant coach Matt Meuchel gave the team a small speech after Oregon had tied the game.

The day before, a ‘hype squirrel,’ as dubbed by Linnie Malkin, made its way onto the Bogle Park field immediately before the Arkansas bats awakened in the sixth. Whether the critter was on-site Sunday is unknown, but regardless, offensive fireworks exploded in the inning, and the Razorbacks are headed to a second consecutive Super Regional because of it.

The duo followed suit again Sunday, launching consecutive home runs in the second inning. It was Malkin’s 22nd of the season and Hoffmann’s eighth.

“I think that a lot of our veterans have taken her under their wing,” Deifel said. “And that’s what we need them to do. Kacie is an incredibly talented hitter, she has a hitter’s mentality…You see her having conversations with Linnie [Malkin], with KB [Sides], with Hannah [Gammill] and they do a really good job of just keeping her really level and just reminding her how dang good she is.”

Wichita State entered the tournament with 118 home runs, while Arkansas had hit 102 and Oregon 62. Princeton came into the regional with 15 home runs.

“There’s a lot of power hitters in this region,” Deifel said following the selection show May 15. “I think that’s probably why they kind of grouped us together. There’s a lot of bombs hit by these teams.”

Her analysis was spot on. Seventeen home runs were hit over the course of three days, with seven belonging to the Razorbacks. Linnie Malkin, Kacie Hoffmann and Danielle Gibson each hit two home runs in the regional, along with one from KB Sides.

“We are just trying to hit the ball hard,” Gibson said after Sunday’s win against Oregon. “We have a lot of power up and down the lineup and so much power and depth. It’s a facet of our game but I think we’re a lot more than the long ball, which I think is cool to say. It’s really fun when you hit a home run or when your teammate hits a home run because it’s just a big celebration.”

University of Arkansas Athletic Director Hunter Yurachek said he expects an even greater turnout for the Fayetteville Super Regional next weekend.

“What we saw this weekend from our fanbase, we had over 9,000 people over the three days that came and watched our team play,” Yurachek said. “And many sat through that rain delay yesterday. I think next weekend will be just off the charts, the atmosphere.

“Regardless of if it’s Washington or Texas, but especially if it’s Texas, that environment in there will be nothing like that park has ever seen before.”

In the process of punching a ticket to the NCAA Super Regionals, the Razorbacks set a new single-season wins record.

The 9-3 victory over Oregon was Arkansas’ 47th this year, topping the previous record of 46 set in 1999 by a team that played 19 more games than this season’s squad.

“It’s unbelievable,” he said. “When you talk about how we’re now back-to-back super regional hosts and SEC champions, and from where she started seven years ago to where this program is now, I don’t think anyone could’ve fathomed it.”