Hogs aim to 'climb out of this hole' ahead of Hoover 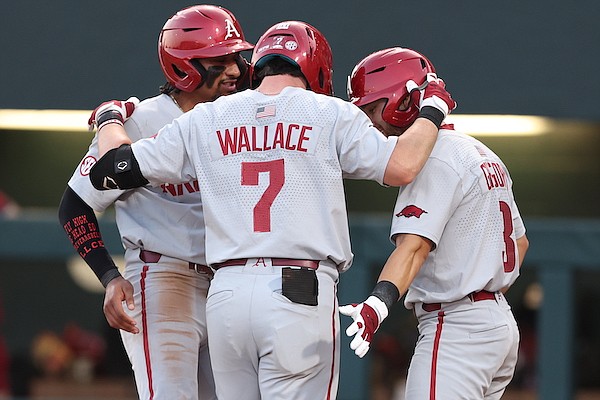 Arkansas third baseman Cayden Wallace (center) is greeted by Jalen Battles (left) and Zack Gregory (right) after Wallace hit a go-ahead home run during the fifth inning of a game against Alabama on Thursday, May 19, 2022, in Tuscaloosa, Ala. (Photo courtesy Alabama Athletics, via SEC Media Portal)

Arkansas baseball fans must be perplexed by the current state of the Razorbacks.

After leading the SEC West right up until the final day of the regular season, the wheels came off for the Razorbacks in Saturday’s 18-5 loss to Alabama.

On successive weekends, Arkansas lost its first home series since 2019 with a setback against Vanderbilt, then dropped a series against Alabama for the first time since 2016.

The Razorbacks entered last week ranked No. 5 in the USA Today coaches poll, which is the poll of record for the Arkansas Democrat-Gazette, but they are certain to take a tumble in today’s newest rankings. Worse, Arkansas has dropped to No. 33 in the Ratings Percentage Index (RPI) rankings, hurt by a poor strength of schedule.

The prospect of hosting a home regional, which seemed certain two weeks ago after a series win at Auburn, is suddenly iffy, and earning a top eight seed is starting to look like a lost cause.

A reporter asked Arkansas Coach Dave Van Horn if a “shock to the system” kind of loss like the pitching and defensive meltdown on Saturday could jolt the Razorbacks heading into the postseason.

More from WholeHogSports: Bad ending leaves Razorbacks without a title

“Well, I hope so,” Van Horn said. “We’ll talk about it in a couple of weeks, I guess, [and] see how it all turns out. But if the pitching doesn’t get better, it’s not going to really make a difference.”

No Arkansas starter made it through five innings against the Crimson Tide, a trend that has been steady since the halfway point of conference play, which the Razorbacks reached with an 11-4 record. They are 7-8 since then.

Arkansas’ team earned run average of 3.57 was 10th in the nation heading into the series at Alabama. Today, it is 3.89 after the Crimson Tide racked up 26 runs in sweeping the final two games of the season.

The Razorbacks bused straight over to the Birmingham area after Saturday’s loss. They had a team weight-lifting day scheduled for Sunday and workouts at Samford University on tap for a couple of days before starting SEC Tournament play on Wednesday at Hoover Metropolitan Stadium.

Van Horn said “nobody’s really in a very good mood right now” near the end of his remarks to the media on Saturday.

He also discussed his remarks to the team after the Razorbacks allowed their most runs in a game since a 19-8 loss at Texas on June 5, 2005.

“What was said after the game was … disappointed like everyone else,” he said. “I’m not going to go through the game because we all were here to live it together, so we all have to handle it together. We’ve got to climb out of this hole a little bit.”

The Razorbacks would seem to have multiple options for their pitching plans in Hoover after changing up their starting rotation for the first time all season against the Tide.

But because their pitch counts were lower than normal, any Arkansas pitcher could theoretically be in line to start Wednesday’s game versus either 6 seed Georgia or 11 seed Alabama.

“I don’t know yet,” Van Horn said when asked about pitching plans. “Wiggins, he threw 31 pitches. I’m sure he would be good to go. We could probably pitch Connor if we wanted to.”

“I don’t know,” he said. “We’ll figure that over the next couple of days, just get a plan together of how we want to attack the next game.”

Arkansas baseball at a glance

WHERE Hoover Metropolitan Stadium in Hoover, Ala.

SHORT HOPS Arkansas went 7-3 in SEC series openers, 6-4 in Game 2s and 5-5 in Game 3s. … The Razorbacks did not face Georgia in the regular season and just came off a 1-2 series at Alabama last weekend. … OF/DH Chris Lanzilli went 6 for 13 (.462) with 4 RBI and 2 runs scored while batting cleanup against Alabama after sitting in five of the previous 10 games. … CF Braydon Webb went 5 for 11 (.455) against Alabama with a home run and two walks. He tied Brady Slavens for the team home run lead with 13 with a 2-run blast on Saturday. … Arkansas 3B Cayden Wallace will enter the postseason on a 9-game hitting streak, going 12 for 40 (.300) with 8 RBI and 8 runs scored in that span.

The Razorbacks' week ahead