Razorbacks drop to No. 10 in coaches poll 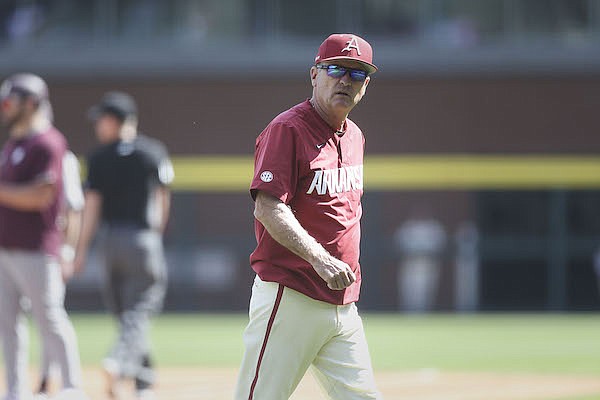 Arkansas coach Dave Van Horn walks toward the dugout during a game against Mississippi State on Sunday, April 3, 2022, in Fayetteville.

The Razorbacks (38-16) fell five spots to No. 10 following a series loss at Alabama last week. The Crimson Tide clinched the series with an 18-5 victory on Saturday.

Alabama also won 8-6 after the Razorbacks won the opener 7-3.

Arkansas has fallen seven spots since it was ranked third three weeks ago. The Razorbacks have lost six of their last 10 games against Missouri State, Auburn, Vanderbilt and Alabama.

Georgia, ranked 25th last week, fell out of the poll after a series loss to Missouri.

The Razorbacks have been ranked in 74 consecutive coaches polls dating to 2017. The coaches poll is the ranking of record for the Arkansas Democrat-Gazette.