Arkansas vs. Alabama at the SEC Tournament: How to watch and listen, forecast, pitching matchup, team comparisons 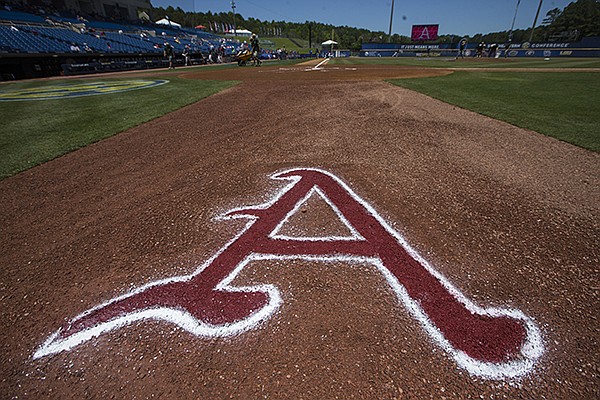 An Arkansas logo is shown on the field prior to a game between the Razorbacks and Ole Miss at the SEC Tournament on Wednesday, May 22, 2019, in Hoover, Ala.

WHERE Hoover Metropolitan Stadium (10,800) in Hoover, Ala.

LAST MEETING Alabama defeated Arkansas 18-5 on May 21 in Tuscaloosa, Ala.

TELEVISION The game will be televised by SEC Network and can be accessed on WatchESPN.com and via the ESPN app (carrier login required).

FORECAST According to the National Weather Service, there is an 80% chance of showers and thunderstorms Wednesday afternoon in Hoover, Ala., with a high of 82 degrees.

NOTABLE Neither team can be eliminated with a loss Wednesday. The winner of the game will play in a non-elimination game Thursday against the winner of a Wednesday game between Florida and Texas A&M. The loser of the game will play in an elimination game Thursday against the loser of the Florida-Texas A&M game....Alabama advanced to double elimination play with a 5-3 victory over Georgia on Tuesday....Arkansas is the No. 3 seed at the tournament. Alabama is the No. 11 seed....The Crimson Tide won a series over the Razorbacks last week in Tuscaloosa, Ala. After Arkansas won the opening game 7-3, Alabama won the following games 8-6 and 18-5....The Razorbacks are the reigning champion of the SEC Tournament....Arkansas and Alabama are playing each other at the SEC Tournament for the first time since 2011, but the teams have played more recently in Hoover. That happened during the 2015 regular season when Alabama was renovating its on-campus stadium 45 miles away in Tuscaloosa. The Razorbacks swept the series....Neither team has announced a starting pitcher for the game. Following the Alabama series last week, Arkansas coach Dave Van Horn indicated any of his four starters — Connor Noland, Hagen Smith, Jaxon Wiggins or Will McEntire — might be available. Alabama coach Brad Bohannon hinted Tuesday that right hander Jacob McNairy would start against Arkansas, but did not name him the starter.