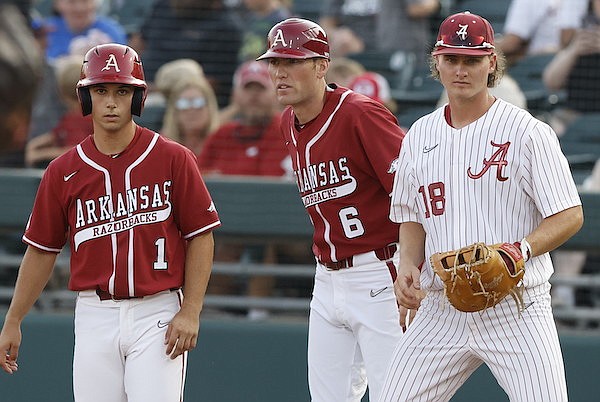 Arkansas will see familiar faces when it opens play at the SEC Baseball Tournament.

Arkansas was initially scheduled to be play Wednesday morning, but an Auburn-Kentucky game scheduled for Tuesday night in Hoover was moved to Wednesday.

Alabama (30-25) defeated Georgia 5-3 in Tuesday’s early game during the single-elimination round at Hoover Metropolitan Stadium. It was the third consecutive win for the Crimson Tide, who qualified for the tournament with an 8-6 victory over the Razorbacks last Friday in Tuscaloosa, Ala., and won the series over Arkansas with an 18-5 victory the following day.

The Razorbacks (38-16) fell five places to No. 10 in this week’s USA Today Baseball Coaches Poll following the series loss, and appeared to take a hit in their hopes to host an NCAA regional next week at Baum-Walker Stadium. In projections published this week, Baseball America dropped Arkansas to the No. 15 seed in the NCAA Tournament and D1Baseball projected the Razorbacks will not be one of the 16 hosts in the regional round.

With the nation’s 33rd-ranked score in the Ratings Performance Index, Arkansas likely needs a good performance in Hoover to fortify its chances to host. RPI is a key metric used in seeding teams for the tournament.

The Razorbacks are guaranteed to play at least two games in Hoover. Games Wednesday, Thursday and Friday are part of a double-elimination format before the tournament moves back to single-elimination games for the weekend.

Arkansas could play Texas A&M, Florida or South Carolina on Thursday. Florida and South Carolina were scheduled to play in a single-elimination game Tuesday afternoon.

The start time for that game — initially scheduled to start in the early afternoon — was delayed until 6:45 p.m. due to rain. The Alabama-Georgia game was delayed for a total of 2 hours, 41 minutes due to rain.

Alabama scored all five of its runs in the first and second innings against Georgia starter Luke Wagner, who was replaced after 1 1/3 innings.

The Crimson Tide scored three runs in the first inning, which included RBI hits by Andrew Pinckney and former Arkansas catcher Dominic Tamez, and a sacrifice fly by William Hamiter. Alabama added two more runs and went ahead 5-0 in the second inning on an RBI hit by Zane Denton and a wild pitch by Wagner that allowed Tommy Seidl to score.

Georgia (35-21) pulled within 5-1 in the bottom of the second when Parks Harber hit a one-out solo home run.

Alabama stranded two runners in the top of the third inning as rain fell. The game was delayed in the middle of the third and did not resume for 2 hours, 6 minutes.

Both teams struggled offensively after the restart. Georgia pulled within 5-3 on Connor Tate’s two-out home run against Brock Guffey in the bottom of the eighth inning, but the Crimson Tide won when Dylan Ray pitched a perfect ninth.