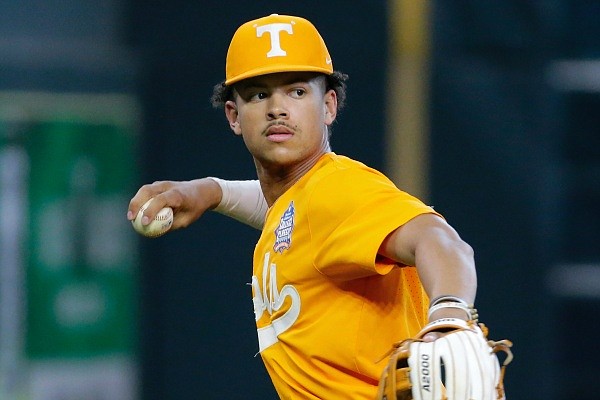 Can Tennessee pull an Arkansas this week in Hoover, Ala., at the SEC Tournament?

After blitzing through the conference with a 25-5 record, the best SEC finish since Vanderbilt went 26-3 in 2013, the No. 1 Volunteers are an overwhelming favorite to pull off the regular season and tournament double, just like the Razorbacks did in 2021.

While Tennessee could not match the Razorbacks’ feat of winning every conference series, also accomplished by Vandy in 2013, the Volunteers did manage to be ranked a near-unanimous No. 1 from March 28 through the end of the season, paralleling Arkansas’ regular-season dominance of last year.

The SEC has crowned seven different tournament champions since 2014, in order: LSU in 2014, Florida, Texas A&M, LSU, Ole Miss, Vanderbilt, no tournament in 2020 due to covid 19, and Arkansas. So a Tennessee win in Hoover would continue the long streak of different winners since LSU won back-to-back tournament titles in 2013 and 2014.

More from WholeHogSports: No Razorbacks on All-SEC first or second team; 4 players recognized by SEC

The top-seed Volunteers and third-seeded Razorbacks, who dropped to No. 10 in the USA Today coaches poll Monday, received opening-round byes — along with SEC West champion Texas A&M and LSU — and do not swing into action until the double elimination portion of the tournament starts Wednesday.

With potentially stormy weather in the forecast for central Alabama, the tournament is scheduled to open today with four games at Hoover Metropolitan Stadium.

The 9:30 a.m. game between 6 seed Georgia and 11 seed Alabama will funnel into Arkansas on Wednesday, while the winner of the second game between 7 seed Florida and 10 seed South Carolina will take on the Aggies.

On the other side of the bracket, 8 seed Vanderbilt and 9 seed Ole Miss are scheduled for a 4:30 p.m. game that will match up the winner with Tennessee, and the nightcap of 5 seed Auburn vs. 12 seed Kentucky will be paired with 4 seed LSU.

The Razorbacks (38-16, 18-12) dropped to No. 33 in the RPI rankings after losing their final two regular0season series, putting Coach Dave Van Horn’s club in the danger zone for hosting an NCAA regional in two weekends.

Arkansas was projected as a No. 2 seed in the NCAA Stillwater (Okla.) Regional by D1Baseball.com on Monday. That web site has three SEC teams projected as national seeds: 1 Tennessee, 8 Texas A&M and 10 Auburn. Other projections are due out today.

The Razorbacks could get to 20-plus wins against SEC teams with a pair of wins in Hoover, which could get them back inside the national ranking range.

Two SEC teams appear to have no shot at making the NCAA Tournament field, Missouri and defending College World Series champion Mississippi State, which are the two teams not participating in the SEC Tournament.

Alabama, Kentucky and South Carolina would seemingly enter the week needing to win the SEC Tournament to secure a berth in the NCAA bracket.

D1Baseball.com projects nine SEC teams into the field, with eight of them receiving either 1 seeds or 2 seeds (Arkansas, Florida, Georgia, LSU and Vanderbilt) and Ole Miss as the only projected 3 seed.

The Rebels are 8-2 in their past 10 games, with the only losses coming last weekend at home against Texas A&M, to put themselves back on the bubble.

The pitching plans for the Razorbacks will be of great interest, as Van Horn said he and pitching coach Matt Hobbs could go in various directions.

Arkansas broke from its season-long pattern of employing Connor Noland, Hagen Smith and Jaxon Wiggins in the weekend rotation by adding Will McEntire into the mix to open the Alabama series, which closed out the regular season.