Arkansas vs. Texas in Super Regional: How to watch and listen, forecast, team comparisons 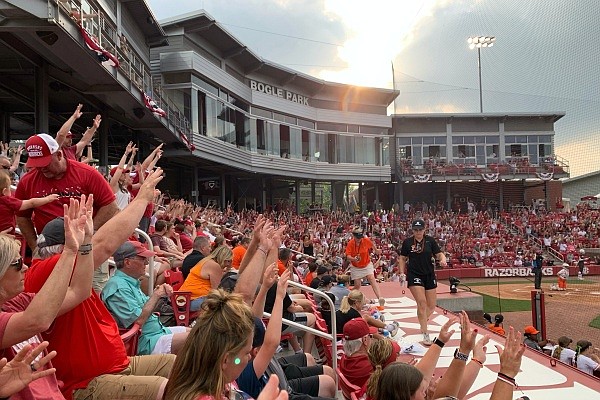 Arkansas fans call the Hogs ON Friday, May 20, 2022, during the Razorbacks’ 11-0 run-rule win over Princeton at Bogle Park in Fayetteville. Visit nwaonline.com/220521Daily/ for THE photo gallery.

TELEVISION The game will be televised by ESPN2 and can be accessed on WatchESPN.com via the ESPN app (carrier login required).

FORECAST According to the National Weather Service, Thursday night will be mostly cloudy with a low around 48.

NOTABLE The winner of the best-of-three-game series will advance to the Women's College World Series in Oklahoma City....The Razorbacks are 27-4 at home this season and have won eight consecutive games at Bogle Park....Arkansas is hosting an NCAA Super Regional for the second consecutive season. It is 0-4 in the super regional round, losing at Oklahoma in 2018 and at home to Arizona in 2021....The Razorbacks defeated Princeton last Friday and Oregon on Saturday and Sunday to advance. Texas won the Seattle Regional by beating Weber State once and host Washington twice....Arkansas, the No. 4 overall seed in the NCAA Tournament, last faced the Longhorns in 2016, which was Courtney Deifel's first season with the Razorbacks....Arkansas starting catcher Taylor Ellsworth transferred from Texas, where she played in 171 games and started 162. She is hitting .344 this season with 14 home runs and 53 RBI in 56 games....Danielle Gibson leads Arkansas with a .445 batting average and 69 RBI. Linnie Malkin has hit a team-high 22 home runs in 48 games played. KB Sides has accounted for 28 of the Razorbacks’ 38 stolen bases….Chenise Delce holds a team-best 2.18 ERA and is 18-2 this season. Mary Haff leads Arkansas with 20 wins and has a 2.61 ERA….Texas allowed 6 runs in 4 games at the Seattle Regional and has not given up more than 2 runs in 6 of the last 7 seven games….Mary Iakopo leads the Longhorns with 10 home runs and 52 RBI. Janae Jefferson has a team-high .425 batting average….Pitcher Hailey Dolcini has a 21-9 record and 2.21 ERA in 183 2/3 innings pitched. No other Texas player has pitched more than 86 1/3 innings....The Longhorns have stolen 91 bases in 101 attempts.