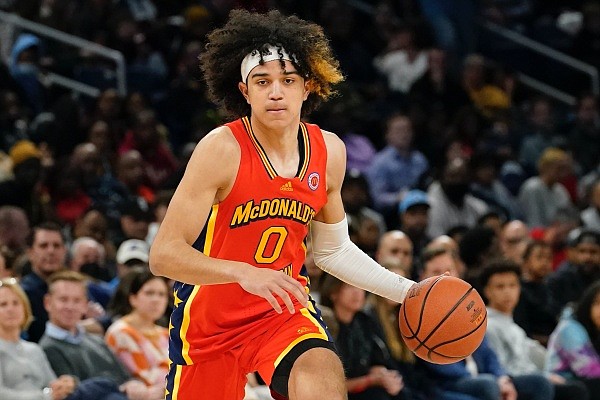 ESPN national recruiting director Paul Biancardi has recognized three Arkansas signees as the best of the 2022 class with ESPN 5-star Anthony Black being the most improved in the class.

Black, 6-7, 198 pounds, of Duncanville, Texas, was an outstanding two-sport athlete who appeared to be destined for a career on the football field.

Arkansas football offered him a fifth offer in April of his sophomore year at a time when he only had one offer in basketball from North Texas.

He slowly saw his stock rise on the hardwood once he focused on one sport and saw offers come from Arkansas, Texas, Auburn, Duke, Georgia, Memphis, Oklahoma, Texas A&M, Tech Tech and several others.

Black finished the ESPN rankings as the No. 8 small forward and the No. 15 overall prospect in the nation for the 2022 class.

"Anthony continued to improve as a rising senior and during his senior season," Biancardi said. "I had a chance to evaluate him at the Wootten Camp back in October. He displayed excellent vision and feel with the skill to score and find the open man. During his senior season his defense continued to improve under Coach (David) Peavey at Duncanville."

Black, who is being recruited to play guard at Arkansas, helped Duncanville to a Class 6A state championship, scoring 17 points in the title game. He was named the game's MVP.

He, along with fellow ESPN 5-star signees Nick Smith Jr. and Jordan Walsh played in the McDonald’s All-American Game. Black and Smith were a part of USA Basketball’s USA Nike Hoop Summit team in Portland that pitted team USA against against top international players.

Black and Smith also took part in the Iverson Classic.