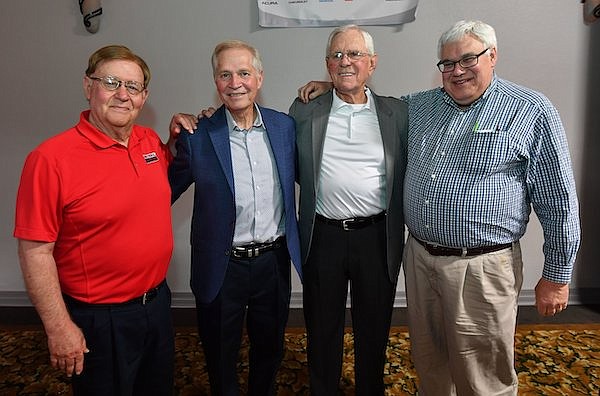 The 2022 Class of the Arkansas Sportscasters and Sports Writers Hall of Fame (from left) Mike Irwin, Chris Mortensen, Mike Nail and Bob Holt pose Wednesday, May 25, 2022, after a ceremony at the Hawgs Illustrated Sports Club luncheon at Mermaids in Fayetteville.

FAYETTEVILLE — Bob Holt, a long-time sports reporter for the Arkansas Democrat-Gazette, was one of four individuals inducted to the Arkansas Sportscasters and Sports Writers Hall of Fame on Wednesday.

Holt was hired by the Arkansas Democrat in June 1981 shortly after he graduated from journalism school at the University of Missouri. He has covered Razorback sports for his entire career in Arkansas, and spent parts of three years based in Dallas reporting on Arkansas interests in the state of Texas.

Holt has been awarded Arkansas Sportswriter of the Year four times by the National Sports Media Association, including in 2021. During a speech that included several humorous anecdotes from his career, Holt thanked past and present Razorback head coaches — some of whom were in attendance — for working with him and thanked readers.

“Without you guys — the readers, the viewers — none of us could do what we do,” Holt said.

Irwin has spent 46 years as a sports reporter at two Fayetteville TV stations. Irwin worked at KFSM from 1975-2012. He said he was offered a retirement package by KFSM at the age of 63, but he was not ready to retire and was hired quickly by KNWA.

Irwin said he was hired at KFSM by an old college classmate who thought Irwin could cover the Razorbacks on TV similar to the way Orville Henry did for the Arkansas Gazette newspaper. There were no TV reporters based in Fayetteville at that time to cover the Razorbacks, so all reports were done by TV reporters in Fort Smith, Little Rock and Tulsa.

“I sat down in (Frank Broyles’) office and told him, ‘I want to do on TV what Orville does in the newspaper,’” Irwin said. “I thought he’d laugh and he said, ‘The door is wide open. Welcome.’

“It really worked from that time on. He was always my first source, and when Frank is your source, how can you go wrong?”

Nail spent 29 seasons as a play-by-play announcer during the golden age of Razorbacks basketball. The majority of his career was spent calling teams coached by Eddie Sutton and Richardson, and he called Arkansas’ games at the Final Four in 1990, 1994 and 1995.

Nail’s call of the final moments of the Razorbacks' 1994 national championship game win over Duke have been used for in-arena highlight videos for many years. He retired from the play-by-play role in 2010. Nail was also a sports anchor on local TV stations, most recently KNWA in the early 2000s.

Nail was hired to replace Paul Eells as the Razorbacks’ basketball voice in 1981. Before then Eells served as the radio play-by-play voice and his calls were simulcast on some TV broadcasts.

“When they were looking for somebody, Coach Broyles said, ‘I’ll form a committee and we’ll make a decision,’” Nail said. “We all know what kinds of committees he had — he was it. He decided that I could do it and he hired me to do basketball, and I’ll forever be grateful.”

Mortensen moved to Northwest Arkansas in 2004 when his son, Alex, enrolled to play quarterback for the Razorbacks. He and his wife remained in the area after Alex graduated college and he has reported on air many times from his homes in Bella Vista and Tontitown.

Mortensen, whose early career was a newspaper reporter in Los Angeles and Atlanta, is the latest in a long line of Arkansans who were inducted into the hall of fame for work at a national or out-of-state network, joining the likes of Pat Summerall, Dizzy Dean, Frank Broyles and George Kell.

“We moved here because my son Alex was coming here to play,” Mortensen said. “His career was certainly not what he wanted, but it brought us so many blessings. We thought about moving back to Atlanta and Alex really felt like this was our home.”